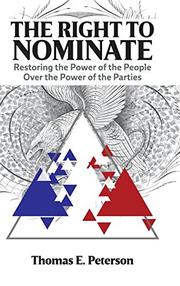 THE RIGHT TO NOMINATE

A reformist jeremiad looks at the current domination of U.S. political parties and declares a plague on all their houses.

For his nonfiction debut, Peterson has crafted a cobweb-clearing call to arms, one that centers on the long-debated American public issue of election reform. But whereas most such proposals focus on tightening term limits or reining in the influence of special interests, PACs, and powerful lobbyists, the author takes aim at much bigger game: the political party system itself. He rightly reminds his readers that the Founding Fathers abhorred the idea of political “factions.” According to Peterson, these parties, having started as petty nuisances, have grown over the centuries into great evils that have robbed the American people of their sovereign right to nominate for public office any candidate they choose, regardless of party affiliation. Peterson’s book is more pertinent than ever, since all of his readers will retain vivid memories of the 2016 U.S. presidential election, in which some lifelong Republicans felt they had to vote for the man who won the nomination to remain loyal to their party. Meanwhile, millions of Democrats seeking to select their own unlikely candidate—an outspoken socialist—were thwarted by the very party machinery they were hoping to strengthen and ended up with a choice some believed was ethically compromised. The author gives a clear and fast-paced account of party history in America. He then deftly lays out the case that party hacks have exploited a loophole in the Constitution that unintentionally allows them to flourish. Finally, he presents a radical solution: a new Constitutional amendment, the 28th, designed to close that loophole. His prose is straightforward and convincing, and although he insufficiently addresses the lifeblood on which political parties survive—the staggering amounts of money provided by the special interests and PACs, which likely own more than enough U.S. senators to guarantee a new amendment will never happen—his case is tremendously thought-provoking.

A bracing call for a crucial bit of reformation in American politics.