Thomas Frosch was born in New York City in 1943. He graduated summa cum laude from Wesleyan University, received a Ph.D. in English from Yale, and taught first at New York University and then, for 43 years, at Queens College of the City University of New York. He has published a book of poetry, Plum Gut (New Rivers Press, 1979); a chapbook, Poems of Gail Fischer and Thomas Frosch (Audit-Poetry, 1975); and poems in over 30 different magazines. He has given a number of readings, including one on radio station WBAI in New York. In the current collection, “Flounder” was anthologized in A Fine Excess; “Flying Pig” was nominated for a Pushcart Prize; and a sequence of eight poems, “Trickster in New York,” was awarded a prize in the Anabiosis Press chapbook contest. Frosch has also published books on Blake and Shelley and articles and reviews on various authors and topics in Renaissance, Romantic, and Modern literature.

From the reviews of Plum Gut:

“A strong poet with extraordinary narrative and lyric gifts” and “fabulous humor”: “I am astonished by the variety of images he produces in a single poem and by his intriguing story lines.”
—Ruby Riemer, The American Book Review

“Thomas Frosch has an open ear and a wide-ranging eye; they combine with a fresh voice to make good poems. . . . Control like this, matched with interesting, moving material, sharp wit, and bright consciousness, make Plum Gut a pleasure to read. . . . It’s exciting to find poems that are well-crafted, and of interest too. That is to say, you might want to read them, for information, for pleasure, for growth. I thank Frosch for his poems.”
—Joel Oppenheimer, The Village Voice 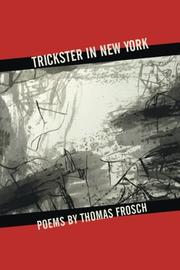 In smart, accessible free-verse poems, Frosch (Plum Gut, 1979, etc.) creates a dizzying and gleeful tour de force for readers. The clever and playful book begins with a poem inspired by a New York Times article about a skydiving pig, told from the animal’s point of view: “I was what happens for a while / Between a syringe of sperm and a porkchop.” The author continues this adapted perspective in poems told in the voices of a flounder, a bluefish, and a sea robin. A series of eight poems places a Native American mythological character, Trickster, in the Big Apple, where he delays a condo meeting, cheats on a standardized test, lobbies for and against a scoop-the-poop law, steals a car, and joins the police force, among other exploits. In “Los Angeles Architecture,” the narrator recounts all of his unlucky (and fantastical) real estate endeavors, one as extreme as a home cantilevered over a cliff: “For a front lawn / I had the Abyss. My guests had to do / a highwire act to get to the front door.” In “Three Notes From New York,” the poet recalls 9/11 and its brutal aftermath: “Out the window a whole slab of horizon is just gone.” The author concludes with “22 Views of Chestnut Drive,” in which the narrator captures a neighborhood through the eyes of 22 artists, including Monet, Degas, Picasso, and van Gogh. Frosch excels at original descriptions, such as that of Hubert the Plowman, who has “the loudest laugh in the pub, ham fists / Banging on the table.” The author’s sense of humor is sly and subtle, and his unexpected plot twists surprise and delight, such as an encounter with a “surging, pulsating, / screaming blob” of children at the Louvre that results in the narrator’s rediscovering the joys of gallivanting with youth through an art museum. Frosch makes poetry downright fun.

A carnival of poetic storytelling that will grab readers’ attention from the first page and never let go.

Work in progress. A series of novels about a fictional island in the Atlantic, where in the late 15th and early 16th centuries a part-Ethiopian, part-Mallorcan explorer sponsored by an unpredictable Henry VIII tries to build a civilization and integrate it with the culture already existing there. In style, the work combines elements of adventure, myth and magical realism, comedy, romantic quest, and history.

Just a Joke: A Psychoanalytic Study of Jokes and Comedy

Work in progress. Building on Freud and later psychoanalytic writers, and analyzing examples from a wide range of literature and jokes from many sources, this study explores the infantile roots of humor; its dream techniques; its sexual, aggressive, and regressive purposes; the role of the ego in its creation and appreciation; and its creation of a protected condition in which the joker thinks he or she can be silly or get away with the normally unacceptable.

A chapbook published by Audit-Poetry and including works by two poets.

Shelley and the Romantic Imagination: A Psychological Study

Shelley was the most extreme and controversial of the English Romantics, and this book studies the most romantic element in his vision and in Romanticism in general: the attempt to bring to life imaginings of ideal eros and of a human paradise. Using Freud and later psychoanalytic writers, the book analyzes an interplay in Shelley between a regressive impulse to return to the union with the mother and an aggressive, progressive impulse toward a separate, autonomous ego. Published by University of Delaware Press.
ISBN: 13 :978-0-87413-978-5

The Awakening of Albion: The Renovation of the Body in the Poetry of William Blake

This book, published by Cornell University Press, argues that Blake, often interpreted as a mystical poet, was intensely concerned in his poetry with the body and the senses and envisioned an improvement in their power that paralleled in secular terms a resurrection of the body. The agency of that transformation was for Blake the artistic and poetic imagination.
ISBN: 0-801408156