Thomas John left his acting job at Universal Studios in 1992. Returning to his hometown, he spent the next twenty-one years as a union Sheet Metal worker. A disabling back surgery led to his debut novel; "The Healing of Reverend James."
Mr. John wrote the column, "Acting Up," for the trade publication, "The Florida Picture Show," as well as free-lance articles for the magazine. A graduate of the American Academy of Arts, Thomas lived in New York City for seven years. He lived in Orlando, Florida for five years.
Mr. John is currently developing the sequel and the prequel to "The Healing of Reverend James," as well as a stand alone thriller.

“A high-stakes yet thoroughly pleasant story of recovery from tragedy firmly grounded in faith.”
– Kirkus Reviews 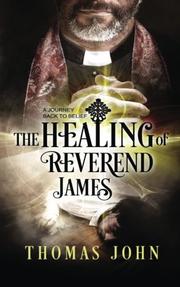 The Healing of Reverend James

In John’s debut novel, a religious man’s redemption comes at a high price.

The 50-year-old Rev. James Matthews is the fourth in a line of African-American preachers manning the lectern in a Jamestown, New York, church. This house of worship, built around a very special hand-carved cross, was founded by his great-grandfather shortly after the Civil War and has been a place of spiritual guidance and refuge for the community ever since. However, the latest Matthews man of the cloth is enduring a serious crisis of faith following the tragic death of his wife, Thelma, in a car accident, and his son, John, from cancer. As this brisk novel opens, James’ son has just died.  Adding to the melodrama is Luke Jones, the man who was behind the wheel of the car that killed Thelma. Having served only five of the 10 years of his sentence before being paroled for good behavior, he’s back in Jamestown, plying his trade of petty theft and general bad behavior. Although James struggles to regain his faith, it’s Luke who’s most in need of redemption. Following an accident at the church, the good reverend finds that he may have developed an unusual and powerful ability to help Luke and others. Although John’s novel is entertaining, it often feels like a fait accompli. The reverend’s redemption, for example, is never truly in question; instead, readers are pulled along by the tension between him and Luke. Their fates seem linked, with neither able to easily dismiss the other. Still, the religious certitude of almost all the supporting characters feels too easy. A budding romance between the reverend and his co-worker, Maya Richards, adds additional complexity; for many years, Maya kept her amorous feelings for James to herself out of respect for the late Thelma, but when he has a brush with death, she’s emboldened to act on her feelings. Their developing relationship grounds the novel’s more paranormal elements and provides a nice counterpoint to the violence that Luke represents. In the end, it’s Maya’s love as much as anything else that helps James find redemption.

A high-stakes yet thoroughly pleasant story of recovery from tragedy firmly grounded in faith.

Lord of the Rings; Tolkein

My family and my imagination