Raised crisscrossing America pulling a small green trailer behind the family car, Timothy Jay Smith developed a ceaseless wanderlust that has taken him around the world many times. En route, he’s found the characters that people his work. Polish cops and Greek fishermen, mercenaries and arms dealers, child prostitutes and wannabe terrorists, Indian Chiefs and Indian tailors: he’s hung with them all in an unparalleled international career that’s seen him smuggle banned plays from behind the Iron Curtain, maneuver through war zones and Occupied Territories, represent the U.S. at the highest levels of foreign governments, and stowaway aboard a ‘devil’s barge’ for a three-days crossing from Cape Verde that landed him in an African jail.

If life were a sport, Tim’s life would qualify as an extreme one, yet he’s managed most of it by working with people in personal, even intimate, settings. His professional life took him from the White House corridors to America’s harshest neighborhoods, from palace dinners to slum pickings, and these experiences explain the unique breadth and sensibility of his work.

Tim brings the same energy to his writing that he brought to a distinguished career, and as a result, he’s won top honors for his screenplays, stage plays and novels in numerous prestigious competitions; among them, contests sponsored by the American Screenwriters Association, WriteMovies, Houston WorldFest, Rhode Island International Film Festival, and the Hollywood Screenwriting Institute. He won the 2008 Paris Prize for Fiction for his novel, A Vision of Angels; and Kirkus Reviews called a second novel, Cooper's Promise, "literary dynamite" and selected it as one of the Best Books of 2012. His first stageplay, which went on to a successful NYC production, won the very prestigious Stanley Drama Award. 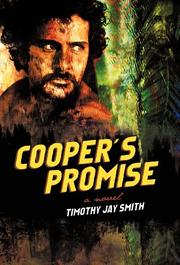 In Smith’s debut novel, a former American soldier hiding out in a small African country can’t escape the ghosts of his past.

Sgt. Cooper Chance, an Army deserter, spends his days in Lalanga drinking cheap gin in a dive. He makes a promise to Lulay, a young girl who sells herself each night, to someday take her away. What little money Chance makes comes from buying smuggled diamonds from a blind boy and his sister and turning a meager profit at an Arab merchant’s shop. There, he meets the merchant’s son, Sadiq, with whom he becomes quickly enamored; he longs to accidentally run into him at a local hammam (a bathhouse and massage parlor). But Chance’s life is confounded by a strange man named Sam Brown, who offers him a way to return to the United States with an honorable discharge—if he’ll use his sharpshooter skills again. Smith’s first effort is a poignant experience. He wastes no time in deftly establishing the atmosphere: ice-cold glasses set against sweaty brows in the blistering heat, with frequent power outages that leave Chance lying on the bed as he waits for the ceiling fan to come back to life. Characters are enhanced by their association with Chance’s past: His need to save Lulay recalls his kid sister being tormented by their father, while his wariness of forming affection for Sadiq echoes a horribly failed relationship in the Army. At its best, the book is slightly refitted yet indomitable noir: the protagonist knocked out cold and tossed in jail; Lulay’s constant pleading for help like a vulnerable dame “hiring” Chance; and the mysterious Sadiq calling to mind a femme—or homme—fatale. The novel, a quick read at a little over 200 pages, is rounded out by sharp, cynical dialogue: “Where’s this?” Chance asks, pointing to a postcard; “Somewhere else,” he’s told.

A Vision of Angels: Paris Prize for Ficton, 2008

A Vision of Angels

A terrorist attack planned for Easter Sunday in Jerusalem sets off a chain of events that weave together the lives of an American journalist, Israeli war hero, Palestinian farmer, and Arab-Christian grocer. Alerted to a suicide bomb plot, Major Jakov Levy orders the border with Gaza Strip closed. Unable to get his produce to market, Amin Mousa dumps truckloads of tomatoes in a refugee camp. David Kessler, an American journalist, sees it reported on television and goes to Gaza for Amin's story. Hamas militants plot to smuggle a bomb out in David’s car and retrieve it when he returns home, but he’s unexpectedly detoured on the way. Meanwhile, a cell member confesses to the plot, and the race is on to find David and retrieve the bomb before the terrorists can. Ultimately A Vision of Angels is a story of reconciliation and hope, but not before events as tragic as a modern passion play change the lives of four families forever.
Published: July 2, 2013
ISBN: 9780983476443

Fire on the Island (novel-in-progress)

An FBI agent assists a Greek island village solve the case of an arsonist who threatens to destroy it.