For many years, T.L. Fischer worked professionally with victims of family violence and violence against children. Every day Fischer saw how fortunate he had been as a child—to have had a loving home where he’d always felt safe. These experiences led Fischer to write about the Cozies and their world of simple pleasures, where imagination protects the innocent.

Fischer holds a Bachelor of Arts degree in English Literature from McGill University of Montreal, Canada, as well as advanced degrees in communications and law. While pursuing his education, Fischer studied in both France and England. While a very young man, he traveled the world, from the lava fields of eastern Idaho to Lake Baikal in Siberia.

Fischer and his spouse, D, are avid dog lovers. D volunteers for animal welfare causes, and Fischer writes as often as time allows.

““In this tale, Fischer balances danger and escapades with appropriately warm and supportive coziness. . . . An imaginative and witty adventure . . .””
– Kirkus Reviews 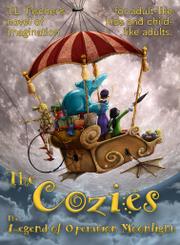 In 1927, figments of the imagination come to the rescue of a kidnapped baby in this debut novel for children and adults.

The narrator is a dapper, learned, and imaginary lop-eared rabbit named Thursby, one of several Cozies, or nursery figments: creatures generated “when moonlight enters a home and touches a child’s happy dreams.” They exist to comfort kids at night, and it’s only by moonlight that the Cozies gain access to the real world and use items from the realm of dreams. Other Cozies in Thursby’s household include Gubbins (“he resembles what might happen if two pocket watches collided”); the fairylike, tutu-wearing Twins; the kohl-eyed and elegant Musetta; and Rumple, something like a squashy elephant. Their current charge is 1-year-old Bingo, short for Benjamin. Bingo’s new nanny, Agnes, has a sullen and covetous air that worries the Cozies—for good reason. When Bingo is left in her care, Agnes hands the child over to a brutish lout. “THEY TOOK OUR BINGO!” Musetta shouts, and the Cozies swing into action. Using a cloud, plum glue (“made from sugar plums, visions of which…dance in children’s heads”), a slice of starry night, and moonlight to make a kind of zeppelin, they track Bingo to the kidnappers’ lair in the Big City, recruit some human help, and fulfill their child-consoling mission. In this tale, Fischer balances danger and escapades with appropriately warm and supportive coziness. Children and innocence are carefully watched over and protected in this world. This has soothing appeal for kids, but the book’s vocabulary and point of view are often pitched more to adult readers: “You may recognize here the genesis of the theory now known as layered imaginations. I have since referred to the concept regularly in my academic writings and, allegorically, in my poetry,” says Thursby. The trouble is that adults know too well that innocents aren’t always safeguarded, making the story’s reassurances ring a little hollow. That the baby is from a prosperous family with servants while the thugs are working class also raises unsettling questions for adults.

An imaginative and witty adventure, though perhaps not as comforting as intended.