T.L. McDowell (1963-Present) was born in North Florida and came from parents who were descendants of Scottish/Irish and Native American. He grew up in a small town where less than five hundred people lived. began writing stories when he was nine years old. He loved the stories of Daniel Boone, George Washington and others shared with him by his teachers. These stories gave him an incredible imagination for creating stories for his friends and he would often write and share at a young age. After finishing school, he began a career in civil service and devoted his time to that career. He used experiences in his field to develop stories and create characters so one day he could share with others. The inspiration for Legacy of the Order began when his grandson was born and he started developing the story after writing versions of it for years. Some of the characters found in the story are based on his experiences with people he met visiting other places across the country. Always having a love for storytelling, he decided to write his first novel after his grandson was born. The story began almost ten years ago and has so many layers that other stories and tales are sure to come. He still lives in the area he grew up in and continues to serve the citizens of Florida. 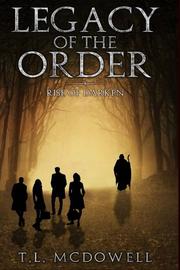 LEGACY OF THE ORDER

In McDowell’s fantasy debut, a Virginia college student learns that he’s fated to restore peace and balance to four realms—but he may instead lay waste to everything.

Freshman Adam Taylor is looking forward to a North Carolina archaeological dig with professor Lance Washington and his fellow students. But the rock they’re looking for, the Nezera, turns out to have ties to Adam and his friends Nolan Williams, Jessica Jefferson, and Mary Glass. They’re all direct descendants of founding members of the Order. This centuries-old group, to which the professor currently belongs, protects the human realm of Calterone. There are three other realms as well, but Kitrona, where the evil Grey Bloods reside, is the greatest concern. The Grey Bloods can destroy all the other realms if they possess the Nezera, which, according to prophecy, can only be found by someone known as “the Sequoia.” Washington ultimately determines that Adam is the Sequoia, and he enlists him and his pals into the Order so that they can undergo the extensive training they’ll need for their mission. Meanwhile, Grey Bloods start showing up in Calterone—one or two at time—with violent intentions. Adam has the power to return all the realms to harmony, but new information about his parents’ mysterious deaths could send him on a different, more destructive path. McDowell’s plot gets progressively more engaging as it unfolds. After he firmly establishes the Grey Bloods as formidable villains, he introduces characters from other realms, including vampire-esque Boefangs and others that could be either friends or foes. The Order also gets a rich historical background; for instance, its members’ weapons, Ceptors, contain pieces of a particularly famous lightning rod. That said, McDowell sometimes skimps on narrative details. He offers no description of one minor character, for instance, other than to say that he’s a gnome. Still, he delivers a fantasy tale that’s unusually free of obscenities and graphic violence, although torture scenes are implied. There are also some exciting plot turns, such as the revelation of a mole within the Order.

A spirited, ambitious start to a planned series.

Trailer for Legacy of the Order: Rise of Darken