Terrence L. Williams is a retired Central Intelligence Agency Operations Officer with over thirty years of experience conducting and managing covert operations in Asia, Europe and Eastern Europe.  He is the recipient of the American Political Science Association's Congressional Fellowship as well as a Tufts University Latin American Teaching Fellowship.  Mr. Williams trained with Special Forces early in his career and subsequently supported the military around the globe. Prior to his tenure at CIA, Williams taught at the University of San Carlos in Guatemala City, worked for Bell Helicopter training the Imperial Iranian Army-Air Force in Esfahan, Iran and taught at Bunka University in Tokyo, Japan.   His awards include the Nato Service Medal, CIA’s Career Intelligence Medal, The Bosnian Service Medal and the National Intelligence Medal from the Government of Taiwan. The Ponte Vedra Beach-based writer holds degrees from Bridgewater State College, where he studied anthropology, philosophy and literature, the School for International Training, and Long Ridge Writer’s Group. His award winning novel, Cooper's Revenge was published in 2013. The sequel, Unit 400 – The Assassins, which was released in January 2014 was awarded a 2014 Florida authors and Publishers President’s Award. His third novel, Zero Day: China’s Cyber Wars was published in February 2017. It was awarded the 2017 gold medals for Adult Fiction-General and E-Book by the Florida Authors and Publishers Association, as well as the 2017 silver medal for the Royal Palm Literary Awards Competition. He is currently working on his fourth novel, which deals with an ISIS fifth column in the U.S. 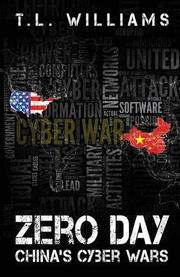 In this political thriller, the United States races to thwart a massive cyberattack from China.

A letter thrown into a U.S. Consulate vehicle reveals that covert cyberoperations were conducted against the U.S. secretary of state by the Chinese government and that other attacks, on an even greater scale, are soon to follow. Because Logan Alexander is already in Hong Kong—he is the head of a legitimate consulting firm that also functions as a front for the CIA—he’s tasked with making contact with the letter’s author, Li Jiang. Li is a senior officer in the Chinese Ministry of Public Security, privy to sensitive information regarding China’s designs. He reveals to Logan that China, recognizing that it is no match for the United States from the perspective of conventional warfare, has turned its sights to other means of regaining dominance in Asia and the world at large. To that end, it plans a massive Zero Day assault on the American financial system, with the hope of undermining international confidence in the United Sates. When Li is asked what precisely is China’s ultimate objective, he responds concisely: “Nothing less than China replacing the U.S. as the number one economy in the world.” Logan, a former Navy SEAL whose military career was cut short by an injury sustained in combat, must not only determine Li’s trustworthiness, but also contend with traitors within his own ranks. Author Williams (Cooper’s Revenge, 2013, etc.) is a former operations officer for the CIA, and his professional background is evidenced by the expert account he provides of labyrinthine American and Chinese intelligence services. The author also constructs believable characters: Li’s treason is partly the result of his father’s betrayal by a corrupt Communist Party. The plot races at breakneck speed and artfully combines grand geopolitical drama with political plausibility. There is no shortage of bureaucratic and technological complexity, and readers looking for a breezy adventure story might find the details daunting. But Williams has produced a believable, timely tale brimming with cinematic power.

A skillfully rendered account of superpowers locked in covert war.

I am a conservationist and in my spare time work to conserve sea turtles.

Iran's Islamic Revolutionary Guard Corps is reeling from a devastating attack on its covert training center in Bandar Deylam, Iran. In retaliation, Iran's Supreme Ruler unleashes an ultra secret weapon-Unit 400. This cadre of trained assassins has its roots in ancient Persian culture, when Ismaili leader, Hassan al-Sabbah, unleashed the Hashashin from their mountain fortress at Alamut to assassinate political and religious foes. One man stands in their way - former Navy SEAL Logan Alexander. In this exciting sequel to award winning author, T.L. Williams debut novel, Cooper's Revenge, Logan and his Special Forces team travel to Europe and South America in an effort to track down the elusive killers before they can strike again.
ISBN: 9780988440036