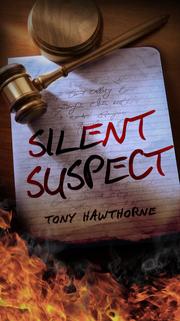 Hawthorne’s debut novel follows a Cape Cod lawyer who defends a mute old woman with memory loss in her trial for a 50-year-old murder in a hostile Southern town.

Olivia St. Clair, 72, is a successful, mute sculptress living the twilight of her life on Cape Cod. One day, however, she’s suddenly arrested and whisked away to a South Carolina town to face murder charges in the death of her wealthy industrialist lover, who died more than 50 years ago in a mysterious factory fire. To defend her, she hires John Bartlemas, a Cape Cod lawyer with little criminal experience. Bartlemas is dealing with his own personal problems, for which he needs money, but what he expects will be a quick guilty plea and probation for St. Clair turns into a desperate fight for her life when the local district attorney unexpectedly asks for the death penalty. Bartlemas finds himself not only struggling with a mute client and her poor memory, but also a prejudiced Southern town that would like nothing better than to see his client dead. Hawthorne has written a sleek, stylish murder mystery with a sharp focus that never loses sight of the main plot even as it takes occasional detours into subplots, each adding to the story’s enjoyment and understanding. Although this is his debut, Hawthorne, a former attorney, avoids the trap of stuffing the book full of everything he knows, and the story moves along briskly. The book perfectly captures the “fish out of water” element felt by Bartlemas and St. Clair in a suspicious town and legal system that views the Northerners as haughty Yankees trying to hoodwink them. Among the small yet memorable cast, Bartlemas is well-defined, but perhaps the most interesting is St. Clair. Questions surround her yet remain unanswered even as the case is tried and the mystery revealed. Another book featuring one or both of them could fill in the gaps—a return most readers would welcome.

Strong characters, an intriguing story, and a brisk pace make for a highly readable legal thriller.