In many respects, my new novel, “Unfinished Business,” is an outgrowth of my years working within the business world, as a writer of business proposals, business plans and two business books. It is also a reflection of my years traveling the world writing special sections for Audubon magazine, and articles for dozens of other magazines and newspapers spanning the U.S. from The New York Times to the Los Angeles Times.

The novel’s subject matter is particularly topical, given the state in which the country and the world find themselves in the 21st Century. It deals with the manipulations of an unscrupulous CEO and the consequences of those actions, all of which are wrapped in a mystery that unfolds as the novel progresses. It is set in locations throughout the world, from New York to Central America, the Caribbean and Europe; all places where I've traveled extensively.

The dramatic tension is driven by the CEO, who is involved in stock manipulation and other business decisions that are so ego-driven they have destructive effects on the global conglomerate he heads. All of this occurs at a time when a much greater percentage of the general public is aware of this sort of activity, given what is going on in the real world of business. Some of the CEO’s decisions, excused as “it’s only business,” have terrible consequences, including the massacre in Honduras that opens the book.

The character who seeks revenge for that crime is a metaphor for all those who have been devastated by the actions of unscrupulous business people. Nonetheless, the plot is a unique detective story, involving a business sleuth who must unravel the mystery of what is going on at the company and how it has impacted people, sometimes in lethal ways.

My longest lasting writing relationship was with the late Donald Bain. I spent more than 40 years collaborating with Don, the ghostwriter of more than 100 mystery novels and author of “Murder, She Wrote,” books, spun off from the popular TV show. In addition to that steady gig, Don was a magnet for ghostwriting projects. He ghosted so many detective, cop, crime and mystery novels he couldn’t write them all. Instead, he farmed books out to me. We also collaborated on a business book for a client, then did the company’s newsletters for years. I began writing Unfinished Business 20 years ago, turning to it during breaks in ghostwriting and journalism assignments. Don was always extremely helpful when I'd get bogged down and we'd brainstorm plot lines, as I had done with him many times during his book projects. Late in his life, with my manuscript taking final shape, he was very complimentary of the result: “From a massacre in a Honduran Indian village to major corporate boardrooms where greed reigns, Unfinished Business grips you from the first page and doesn’t let go until the stunning conclusion. A provocative, insightful thriller.”

In addition to Unfinished Business, I have written two business books: “Live Via Satellite,” about Comsat Corporation and the technology that launched the global communications revolution: “The Whitford Way,” about the nonstick coating company that has made the world run more smoothly.

I am editor and publisher of Natural Traveler Magazine®, a limited run print quarterly I founded in 2019. That December, I opened a Word doc, and dropped in stories and photos that colleagues I’d met over the years had been sharing with me. Suddenly, I had a 64-page version of my take on The Saturday Evening Post, where I had interned during my senior year in college. We have published, in print and on the Internet, continuously since our inaugural issue: short stories, poetry, memoirs, essays, photo spreads and artwork by contributors from Vermont to Oregon, the Upper West Side of Manhattan to Texas, Wellington New Zealand and Kuala Lumpur, Malaysia.

In addition to my newspaper and magazine journalism, I am an accomplished photographer and my photos have illustrated much of my journalistic work. I am also a musician and composer, having recently completed my first musical play, “Leaving Pleasantville,” about the 15-year period from 1955 to 1970, when Rock ‘n’ Roll changed the world of music.

I hold a B.A. in Journalism from New York University and M.A. in English Literature from Hofstra University. During my time at NYU, I was greatly influenced by the cultural changes that were evolving around NYU’s urban campus in Lower Manhattan in the 1960s. Bob Dylan was playing the coffee houses, Woody Allen was doing standup, the Beat Poets and Progressive Jazz musicians were all over Greenwich Village. My coeditor and I at the NYU newspaper created a weekly insert to cover as much of that cultural scene as we could and it made a lasting impression on me. When I graduated, I wanted to work for The Saturday Evening Post or The New Yorker. Alas, I was 23, drafted by the Army but took a commission as an Air Force officer and, after four years training pilots for the Vietnam War, returned to New York with a wife and children and followed the dictates of family down divergent roads, all centered around a career as a writer.

I live in Glen Cove, New York, with my wife, Candy, one of the country’s preeminent gynecological nurse practitioners. We have three daughters and seven grandchildren.

For examples of my work, follow the links below. 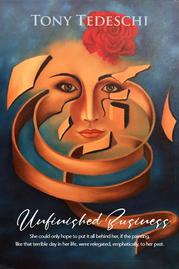 A complex thriller set in the cutthroat world of corporate maneuvering.

George Caldwell putters around his empty home, a widower steeped in classic films, Modernist poetry, and orchestral music. He’s retired from his position as a logistics executive at design company International Home Interiors.However, he’s not merely a financially comfortable older man with a taste for culture, but also a Raymond Chandler-esque private detective of sorts. Specifically, Caldwell is a freelance corporate fixer, hired by his old mentor, IHI founder Jim Davis, to see why the company’s CEO, Clifford Stiles, is seemingly looking to fire Amelia Hartung, who has Caldwell’s former job. She’s being blamed for problems at the company that seem to be the work of someone else with impressive computer skills. Amelia and the other workers at IHI fear few things as much being fired, as it represents a life of diminished opportunity. As Caldwell investigates why an Italian factory is mysteriously shutting down, disrupting IHI’s international supply chain, readers are given intriguing insight into the other characters that make up the book’s ensemble, including Amelia’s treacherous colleagues; her husband, who wants “a wife, not a captain of industry”; and various other players who play minor, albeit colorful, roles throughout. Overall, these characterizations help to make Tedeschi’s thriller into an efficient, spirited romp. There are a few unsavory scenes of older male businessmen lamenting the incursion of women in the world of business, or reassuring themselves that their sexist views aren’t actually sexist. But on the whole, this is a read that’s often entertaining, even when its plot turns are unsurprising.