Torvi Tacuski is a New York Times, USA Today, Wall Street Journal, and #1 Amazon best-selling author…under another name. Her works have been translated into more than twenty languages, and have been optioned for film and television. While Torvi may be a fraud *sort of* hiding behind a literary veil, she is where she feels most comfortable, writing dark fantasy, psychological thrillers, speculative fiction, and satire.

All her life, Torvi thought she was Polish, but discovered she’s predominantly Welsh and Scandinavian. She loves The Golden Girls, Xena: Warrior Princess, nature, the universe, anime/manga, and fantasizing about the apocalypse. She despises socks, shitty people, staying up past 11:00p.m. and sleeping past 5:00a.m. She believes in God and science, is both spiritual and blasphemous, and has tamed her lifelong, debilitating depression and anxiety not-so-simply by taking “the red pill”.

“In this somewhat familiar tale, a confrontational psychiatrist infuses therapy with menace to the delight of thriller enthusiasts.”
– Kirkus Reviews 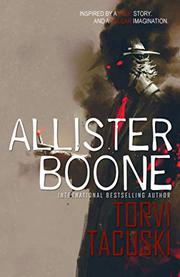 When fallen angels place wagers, human souls are used as currency in this psychological thriller.

The personification of Death, the angel Azrael, is dispensing therapy as Allister Boone, psychiatrist. Not caring whether he helps a patient means he specializes in tough love: “Name one thing…that you dislike about yourself.” He’s only working as a psychiatrist in the service of a bet with fellow dark angel Time. Collaborating since Earth’s creation, they seek to prove if one has power over the other. The game revolves around mortals. Time sends patients to Death with suicidal urges. In the guise of Allister, Azrael attempts to divert their fates. Time tells Azrael: “Let’s see how many lives you can save…while I work against you to end them.” Time will collect a point for “any death involving the suicide of one of” Allister’s patients. But the game’s rules become blurred when other angels, dark and light, make complex deals with one another to exert influence on the contest. Lucifer eventually warns Death: “Time is the dirtiest of all players, Azrael; he’ll do anything to win.” Allister can read his patients’ minds but he fails to be shocked into action by a planned murder-suicide of a whole family. His secretary, Nancy, admonishes him: “Even one death you don’t try to stop, and you can lose everything.” Azrael begins to question how impartial he really is, and whether he can truly stand as witness to humanity’s destructive impulses. “Inspired by a true story,” Tacuski’s (Dirty Eden, 2012) tale displays some fine points, such as fluid dialogue, fully realized secondary characters, and a surprising twist ending that doesn’t court incredulity. The macabre game rules are unique, albeit a bit confusing. But a few elements are eerily similar to other pop-culture offerings. The overall conceit draws obvious comparisons to Netflix’s Lucifer and its source material. Allister’s inner monologues resemble the ones in the Dexter TV series and books. A major childhood trauma brings to mind The Silence of the Lambs. This may just prove the popularity of psychological thrillers, but many readers will find it difficult to be truly shocked by Allister’s actions when it feels like oft-trodden ground. Still, this grim story should please genre fans.

In this somewhat familiar tale, a confrontational psychiatrist infuses therapy with menace to the delight of thriller enthusiasts.

The Vampire Armand by Anne Rice

While on his way to the office one morning, Norman Reeves' daily commute derails when a run-in with a stranger makes him question not only the whereabouts of his wallet, but also his sanity. The stranger tells Norman he must choose from three bizarre people, to take one of them with him on a journey—and he cannot refuse. The stranger? None other than the Devil. The journey? Find the center of Eden and reverse the Fall of Man. Thrust into a place called Creation, Norman's task is plagued by unimaginable people and events. He must unravel impossible clues to free the Three Trees and keep himself out of Hell at the same time. On this surreal journey, Norman discovers many things better left unknown: the shocking secret lives of people close to him, and the terrible reason he was chosen for this mission. If Norman succeeds, his rewards will be unimaginable. But should Norman fail, like all visitors to Creation, he will forget everyone and everything he has ever known, becoming part of the madness that was once the Paradise of Eden.
Published: March 10, 2012
ISBN: 1093821973