Tracey Brame matriculated at the United States Military Academy and graduated with the class of 1992 with a degree in International Relations. She was president of the Speech and Debate Team and excelled on the Power-Lifting Team. The social science department elected her to represent the Academy and the United States in several conferences that required European travel her junior year. From that privilege, Tracey concluded that diversity across borders or within is an asset. While overseas she visited many countries, but was affected by the little townhouse from which Anne Frank wrote her diary. The darkness of Anne's history under Amsterdam's sun and trees was only partially brightened with a visit to Monet's home, where he fashioned a home and work life in vivid color. Tracey obtained dual masters' degrees at the Thunder School of Global Management and the Kelley School of Business. She continued her travels to South Africa and Lima, Peru. Her civilian career is marked with successes in sales, a role that allows her the pleasure of helping others. Her loves are traveling, meeting diverse people, and helping others. Her first book, Underterred: KKK Target, KKK Witness, has been well received by reviewers. Her life demonstrates that a "nation at sleep is a nation at danger.” Tracey is currently writing on lighter topics.

“A PTSD sufferer and distinguished West Point graduate grapples with the machinations of the Ku Klux Klan...A dark, chilling, yet memorable portrait of sheer personal strength, resilience, and perseverance in the face of adversity.”
– Kirkus Reviews 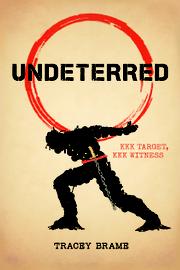 A PTSD sufferer and distinguished West Point graduate grapples with the machinations of the Ku Klux Klan.

Management scholar and entrepreneur Brame’s debut memoir is rife with violence and malevolent crimes as evidenced by the brutally detailed opening chapter where the author regains consciousness after being violently raped by her abusive fiance and fellow West Point classmate. The event scarred her both physically and mentally, causing Brame to experience PTSD and a memory-loss condition called dissociative amnesia as a result. This life shock placed her in harm’s way for years to come, though she recalls being exceptionally intelligent and gifted as a child growing up in inner-city Indiana under the loving protection of her doting grandmother. She graduated from high school—something neither of her parents achieved—and aspired to attend West Point based on the institution’s emphasis on “always doing the right thing.” The author writes proudly of her time at “mostly white” Duke University, enrolling in the ROTC program, and recounts her tenure at West Point in the late 1980s, where hazing, violence, and disillusionment plagued her. Brame’s narrative is painstakingly written and unfolds slowly and steadily with great attention paid to the emotional and physical details of her ordeals as well as a myriad of opposing personalities who either bullied her or came to her aid. After ridding herself of her odious husband, giving birth to a son, and surviving her military duty amid crippling PTSD fatigue, the author began addressing her burgeoning lesbianism. Brame’s story becomes extremely harrowing once she returns to Indiana to accept a pharmaceutical sales job and members of the Ku Klux Klan learn of her lofty political aspirations in her home state. There, ruthless Klansmen vindictively and systematically target her for malicious scrutiny, threats, scare tactics, and coercion, and they bilk her of money as she fearfully, repeatedly relocates to escape. The author survives to tell her tale, but the journey, as it unfolds in this moody and compellingly raw memoir, has been palpably exhaustive.

A dark, chilling, yet memorable portrait of sheer personal strength, resilience, and perseverance in the face of adversity.