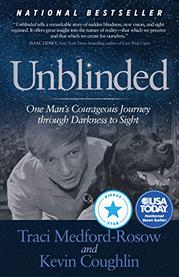 This biography chronicles a man’s sudden vision loss, his self-reinvention, and his seemingly miraculous partial recovery of sight.

In New York City in February 1997, Coughlin’s sight began deteriorating. Five days later, he was completely blind—stricken in his 30s by a rare, irreversible genetic disorder of the optic nerve that normally affects teens and young adults. Already alcohol-dependent, he was soon unemployed and dependent on disability checks. He confronted countless challenges in navigating city life, including physical barriers, inconsiderate strangers, and bureaucratic delays. In his favor, however, were his persistence and his preternatural ability to enlist help from others. For example, he persuaded a clerk to sell him a cane without the required mobility certification, and an ally at Gay Men’s Health Crisis helped him join a support group of HIV-positive blind people even though he was upfront about being HIV-negative. He continued to pursue his love of visual arts and photography by engaging a curator to narrate museum visits and a sighted Alcoholics Anonymous colleague to help take pictures. Coughlin also achieved sobriety and took up meditation, prayer, and ayurvedic practices. His physical and spiritual health improved, which helped him deal with the loss of another job and a beloved guide dog. Fifteen years after becoming blind, his sight began to return, but he already saw life differently. He began a journal (reprinted as an appendix), in which he cites “patience, prayer and turmeric” as “the corner stones of my journey out of the darkness.” Each chapter closes with a selected journal entry, foreshadowing and eventually merging with the narrative. Medford-Rosow and debut author Coughlin skillfully condense two decades into 33 easy-to-read vignettes about Coughlin’s challenges, setbacks, and breakthroughs. This results in a multilayered account that works on several levels, offering granular details of the blindness experience, detailing the difference between physical sight and personal vision, and highlighting the redemptive power of healing. The authors convey Coughlin’s spirituality and faith without being preachy, and they balance poignant moments with workaday complaints and unvarnished assessments of Coughlin’s behavior and relationships. The patient delivery allows this truly exceptional story to speak for itself.