Tracy Novinger, M.A., born in Aruba, was a third-generation member of her family living there. At age ten, her family moved to Brazil where she attended local schools and thrived until moving to the U.S., where she graduated with a B.A. degree at nineteen. From the U.S. she promptly took off to French Polynesia, living for nine years in Tahiti. She translated for the French courts. She speaks four languages fluently, with an elementary command of two more. An author of two non-fiction books illuminating how cultural differences can cause communication problems, she saves travelers from gaffes that cause hard feelings. Novinger’s first book of fiction is "Betrayal on Aruba Winds" (2018). Kirkus Reviews describes the heroine as “unforgettable” and the story as “a vivid historical epic that’s expansive in scope yet intimate in focus.” Based on personal experience, Novinger confides that this story had to be told as fiction to protect the guilty. Discover what you never knew about World War II in Aruba.

“'Betrayal on Aruba Winds', the novel, is 'a vivid historical epic'.”
– Kirkus Reviews 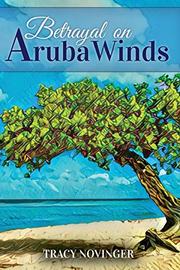 In this novel, a businesswoman at a personal and professional crossroads discovers that the secrets of her past may help her solve problems in her turbulent present.

At 31, Alissia Aruba Saxton has a life that many would envy. She works for an import company in the United States and has a devoted fiance named Tom. While she places a premium on responsibility, she also yearns for the casual spontaneity of Aruba, the island of her birth. Shortly before her wedding, she fights with Tom, makes mistakes at work, and suffers from nightmares. Believing her present problems are rooted in her past, she returns to Aruba, where she reconnects with her mother’s dear friend Rika and recalls the people and places that shaped her life. Her father, Stass, worked for the oil refinery, and her mother, Nessa, was a housewife whose dreams of attending college were thwarted by the high cost of education. Alissia was an observant child who spent much of her time exploring the island with her friend Eddie Williams and observing the men who worked with her father. However, her memories of the island also have a dark side—one that comes into focus when she examines the lingering effects of an assault and her role in a mysterious death. Novinger’s (Intercultural Communication, 2001, etc.) novel is a sweeping historical epic that explores themes of memory, guilt, and responsibility while introducing an unforgettable heroine. Throughout, Alissia is haunted by one simple question: “Is my paradise something I made up?” Her search leads to revelations that are shocking and thought-provoking. The island setting plays an important part in the novel, as well, and Novinger creates a richly detailed portrait of Aruba in the 1940s and ’50s, highlighting aspects of everyday life and showing the importance of the oil industry to the local economy.

A vivid historical epic that’s expansive in scope yet intimate in focus.

In Spain: A review of "Intercultural Communication"

If history were told in the form of stories, it would never be forgotten. -Rudyard Kipling

Tracy Novinger has hiked the Atlantic Pyrénées, stood in the Nebrodi mountains to look down at Messina Straits, protected migrating honey-buzzards from trophy hunters by standing with others in front of hunters' guns.

Communicating with Brazilians: When 'Yes' Means 'No'

Brazilians are gracious and friendly. So great is their cordiality that they will say "yes" to almost any request, even when they actually mean "no." One must learn to understand what the verbal content of an an answer really means by how it is phrased; one must learn to interpret certain body language to know when they are really communicating "no" in a gentle and non-confrontational manner. The book concludes with a checklist of the leading Brazilian cultural characteristics and eight specific recommendations for foreigners communicating with Brazilians. Translated into Korean for Korea-Brazil trade purposes.
ISBN: 0-292-70287-6

Novinger begins by explaining how a major proportion of communication within a culture occurs nonverbally through behavior and manners, shared attitudes, common expectations and so on. Then, using real-life examples and anecdotes she pinpoints commonly occurring obstacles. She shows how mastering the unspoken rules of another culture is a key to cementing business and social relationships. She concludes with nine effective, reliable principles for successfully communicating across cultures. --University of Texas Press, Austin, 2001
ISBN: 0-292-75571-6