Vanessa Mateland makes her home on Cortes Island, British Columbia. Her life experiences, as a community nurse and a sailor, have given her insight into human relations and a thorough knowledge of the magnificent gulf islands in the Pacific northwest. In addition to this, her formal education, a B.Sc.N. from the University of Alberta and an M.A. from University of Victoria, gives her a solid base in research and writing. All of the above, and more, enable her to thoroughly understand the problems and pleasures awaiting her characters.

In Cortes Connection published in 2015, Vanessa creates a passionate romance which explodes between two doctors on a kayak trip around Cortes island.
An earlier novel by Vanessa, Learning to Live: a tale of love and death, published in 2014, is an adventure-romance about a beautiful but breakable woman who escapes from a mental hospital. She bravely faces the many challenges needed to survive in the community while collecting loving friends and warding off an evil pyromaniac bent on her destruction.

Now, in her soon-to-be-released third novel, Galiano Gamble, Vanessa weaves a tale of love and romance between a beautiful Vancouver medical specialist and her handsome office nurse . After their first sexual encounter Shawn disappears and JJ (Dr. Joanne Jane Tomkins) gambles all to follow him to his retreat on Galiano Island to coax and seduce him to return to the city.

“... an enjoyable romantic adventure with a strong conclusion.”
– Kirkus Reviews 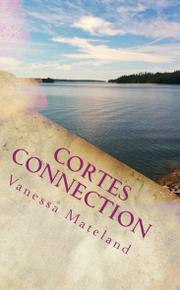 In Mateland’s romance novel, a kayak trip through the Victoria, Canada, region comes alive through the eyes of two lovers.

Dr. Juli Armstrong needs a break from her high-intensity practice, and what better way than a guided ocean kayak tour? Despite the advice of her best friend, who wants Juli to meet a man, Juli is convinced she’s there for her own enjoyment…until she gets partnered up with Dr. Richard Thompson, an arrogant, overbearing doctor from rural Cortes Island. She wants peace and quiet, not commands from a man who isn’t even her tour guide. However, once others abandon the trip, he actually does become her tour guide. Rich loves his rural island practice, but working constantly for the last several years has taken a toll on his health. He wants a break, and the kayak trip is exactly what he needs. Despite his stress, however, Rich is ready for a relationship. He’s immediately interested in Juli, but it takes a lot of paddling and some natural challenges before he can start to break through her guarded exterior and get to know the woman beneath. Both Juli and Rich are reluctant to trust, but their souls are drawn to each other, pulling them together despite the differences and challenges between them. The relationship between Juli and Rich is believable, fraught with real-life difficulties. Their emotional growth is complex, with the stops and starts of real life as they try to change and evolve. Despite strong characters, the story is slowed by pacing issues. Mateland spends time on mundane things like Juli’s preparation for the trip even though the story doesn’t really begin until she arrives at the docks. The author does a fantastic job bringing the setting to life, providing vivid detail about all aspects of the region. At times, however, the book reads like a tour guide, and even Juli rolls her eyes at Rich’s extensive lectures about the local tides, animals, and nature.

Takes time to gain momentum, but an enjoyable romantic adventure with a strong conclusion.

Beautiful and brilliant, thirty-four year old Dr. Joanne Jane Tomkins, JJ to her friends, wakes one sunny June morning longing for a loving relationship and a child. Unfortunately she has an all-consuming professional life as a neurologist, and little energy for anything else. But now, searching for more, she critically examines the men in her life; sadly, all are married or gay. Discouraged but not defeated, she decides to find a passionate life-long partner. Later that day, still in her heightened sense of awareness of men, when she inadvertently collides with Shawn Stevenson who is her newly hired office nurse, her radar begins to vibrate. In the short month he has been working for her, he has made her life easier; for that alone she appreciates him, but suddenly, from somewhere deep inside her body, her hormones start to dance like June bugs on a hot summer night. His six foot four athletic body, his subtle aftershave, and his deep voice act as magnets inexorably tugging her close, as she buzzes with joy and sexual desire. At first the attraction is mutual; until suddenly, after their first passionate night of sex, Shawn disappears. Guilt ridden, as she is his employer, JJ gambles everything to follow him to his rustic cabin on Galiano Island and to convince him to reconsider their relationship. Over the following weeks a terrible storm tests their team work and the green eye of jealousy threatens to tear them apart. Passion and desire war with the everyday realities of very different life styles: Can an urbanite female and a rural-loving man find a common ground? Will JJ’s wealth, and status as a physician, intimidate Shawn? Can these two powerful people develop their searing sexual attraction into a committed workable relationship?

Learning to Live: a tale of love and death

Beautiful and breakable, Jillean Norton impulsively leaves the security of the sheltered mental hospital where she has been treated for a year, launching herself on a roller-coater physical and emotional journey. As she travels from Vancouver to Nanaimo on Vancouver Island, she must find a source of medication to ward off her depression, plus food and shelter while escaping from an evil pyromaniac. Will the love of her new-found friends tip the balance toward safety and stability, or will everyday demands and pathological danger destroy her?
Published: Aug. 9, 2014
ISBN: ISBN 13: 978-1495305764