W. E. Burnette grew up in Bee Tree, North Carolina, and currently lives in Boulder Creek, California. He has been a soldier, a college English teacher, and a marketing writer. He spent seven years in the U. S. Army, doing tours in South Korea, Germany, and Vietnam. After earning an MA in English from San Jose State, Burnette first began to write and publish in 1984 and 1986, co-authoring two college English textbooks with Daniel James Brown, author of The Boys in the Boat, and publishing one with Houghton Mifflin and the other with Holt, Rinehart and Winston. After 10 years of teaching at San Jose State University and at community colleges in California and Washington, he went to work for Lockheed Missiles & Space Company, and since then has worked at various companies in Silicon Valley. He has written two novels and a novella--The Long Roll, Requiem Shark, and Christmas in Sunny California. He is currently at work on a ghost story set in the mountains of Western North Carolina. 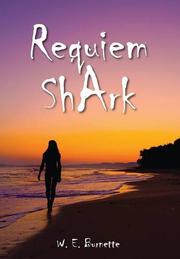 A quest for vengeance after a tragic death turns a ragtag group of strangers into a family in Burnette’s (Christmas in Sunny California, 2011, etc.) adventurous narrative.

Off the coast of Florida, an older surfer places himself between a young couple and a bull shark; he saves them, but he’s fatally mauled in the process. In a boardroom in Maryland, an executive at the top of his game finds himself cut out of the company, adrift with plenty of money but no purpose. Soon, an independent truck driver reads a newspaper at a Florida diner one morning and finds the name of the surfer, a fellow soldier from the Vietnam War whom he hadn’t seen for decades. Driven by various needs—revenge, satisfaction for a wasted life, the desire to begin anew—the executive and truck driver, along with a pair of researchers who’ve fallen on hard times, hunt the bull shark that killed a man who’d been forgotten by the world. Burnette’s story is heavily indebted to Jaws, which Burnette makes explicit with repeated callbacks to the 1975 Steven Spielberg movie and the original 1974 Peter Benchley novel. He tells it with confidence, allowing the action to rise from his nuanced characterizations rather than by forcing plot contrivances on readers. Although the hunt for the massive bull shark is the characters’ primary motivation, their work and travel together gives them each new purposes and helps them bond as a makeshift family. Each character, from the Vietnam veterans who served with the dead surfer to the 17-year-old girl who pulls the surfer from the ocean, has plausible traits and fears, and Burnette writes with a surety that allows the people to drive the story. This confidence extends to the author’s use of the third-person viewpoint, which lets him provide information that the characters never learn. This strategy further develops the novel’s world and provides the groundwork for later explorations.

The parents were nestled all snug in their beds. And the children were up well past midnight, with toys to deliver. At least that’s the way it was for one family, one Christmas morning in sunny California where it never looks a lot like Christmas. Well, almost never. Christmas in Sunny California is a warm-hearted and light-hearted story—and a quick, fun read for the busy holiday season.
Published: Dec. 18, 2011
ISBN: 978-1456516505

As far as historians can tell, no battle of any war has ever been fought in the sleepy confines of the Chinquapin River Valley in the Blue Ridge Mountains. But as the residents of this pastoral highland community gather on the week leading up to Memorial Day in 2004, they pay tribute to one hundred and twenty-two sacrifices, offered up on distant battlefields in a dozen wars that span nearly three hundred years, from Kings Mountain to Chapultepec, from Chancellorsville to Belleau Wood, from Bataan to Chongju to Khe Sahn to Karbala. Memorial Week is a tradition in the Chinquapin Valley. The centerpiece is a Civil War reenactment, and the valley folk, whose forebears fought and died under both flags, see no paradox in a dual celebration of Southern heritage and American patriotism. Memorial Week is homage to those who serve, a chance for the reenactors to camp out for a week, and an educational event with demonstrations, drills, and dramatizations that culminates in an elaborate recreation of a major battle of the Civil War. A summer celebration, with flags and bunting, bands and concession stands, time to relax and time to reflect. But behind the sunshine and the patriotism are troubled hearts and minds. The reenactors and their families find their deepest beliefs about their country challenged by the disturbing pictures from Abu Ghraib. A man still plagued with guilt from his own war seeks to put the past behind him. A woman reassesses her career as corporate competition becomes too much like combat. And two young people struggle with the decision to don the uniform of their country and put themselves in harm's way.
Published: July 15, 2010
ISBN: 978-1453664476