Waheed Rabbani was born in India, near Delhi, and was introduced to Victorian, Edwardian and other English novels, at a very young age, in his father’s library. Most of the numerous books had been purchased by his father at ‘garage sales’ held, by departing British civil service officers, towards the end of their terms in India, during the Raj.

Waheed was educated at St. Patrick’s School, Karachi, Pakistan, and graduated from Loughborough University, Leicestershire, England. He received a Master’s degree from Concordia University, Montreal, Canada. While an engineer by profession, Waheed’s other love is reading and writing English literature. Waheed also obtained a Certificate in Creative Writing from McMaster University, Hamilton, Canada, and embarked on his writing journey.

Waheed and his wife, Alexandra, are now settled on the shores of Lake Ontario, in the historic town of Grimsby. 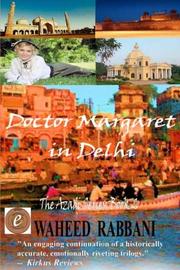 Fresh from Johns Hopkins in North America, Walli started practicing at a hospital in Delhi. He was asked to return a sea chest found in the basement of the Delhi hospital that belonged to a pioneering 19th-century American female doctor named Margaret Wallace. Margaret was remarkable, in part, because so few Americans, let alone women, ventured into India at that time to practice medicine. Before returning the sea chest to Margaret’s living relatives, Walli and his family opened it to discover a host of artifacts, including Margaret’s diaries. The first book of the series introduced the extensive cast, including Walli’s 19th-century grandfather, and the second focuses on Margaret’s response to the murder of her beloved Robert and the attempts of corrupt officials to oust her from her position. Along the way, Margaret fends off various pigheaded men who forcefully attempt to seduce her. To safeguard her social position and protect herself, Margaret can’t cry out for help during these encounters; she must engineer her escape either by literally running out of rooms or waiting for the opportune knock of a servant. These details, along with the wrenching but historically accurate medical scenes (including a birth), give the book a sense of authenticity. Margaret’s struggles make her endearing as a character, and as the narrative unspools, we begin to see hints of how she will ultimately connect to Walli and his own struggles as a young doctor in 1960s Delhi. Although the prose can occasionally be long-winded (“What on earth he is driving at, I thought. Then I heard his next words that rooted me to the spot. I felt Catherine hold my hand, and squeeze it gently, as if to give me some strength”), overall, the writing is competent and keeps the story moving forward.

An engaging continuation of a historically accurate, emotionally riveting trilogy.

Imagine then, a flat landscape, dark for the moment, but even so conveying to a girl running in the still deeper shadow cast by the walls of the Bibighar Gardens an idea of immensity, of distance, such as years before Miss Crane had been conscious of sta

Book I of The Azadi Series of historical fiction set during India’s struggle for freedom—Azadi—from the British Raj. The Books weave a tale of international intrigue, conflict, and poignant love between interesting characters of that era. In 1965 an over 100-year-old sea chest, believed to be that of an American doctor, Margaret, is discovered in the storage room of a hospital in Delhi. Another American doctor, Sharif, who originally hails from Delhi and is on contract at the hospital, is entrusted with the task of locating the mysterious woman’s relatives and returning her trunk. Sharif tracks down Margaret’s descendants in Grimsby, Ontario, Canada. Her diaries, and other artefacts—such as the Kingdom of Jhansi’s crown—are found in the coffer. Margaret, born in New Jersey to a Scottish Presbyterian clerical family, achieves her heart’s desire, in 1850, to become one of the first North American women doctors. She marries her Canadian cousin, Robert, and travels with him to serve in the Crimean war of 1854. In Crimea, they have to not only face hardships of battles, but also endure other conflicts. From events leading to and after the infamous Charge of the Light Brigade, Margaret meets a Russian officer, Count Nicholai. The surprise ending of Book I, leaves Margaret in a quandary, whether to seek vengeance or to continue on with her journey to India. In the end, she believes she has made the right decision.
Published: Sept. 20, 2014
ISBN: 9780993863516