The son of a Canadian educator who became a professor at the U. of Chicago, William Alan Thomas was named a "National Merit Scholar" in the U.S. competition and followed his dad to Chicago. Both the city and the College made deep impressions. After receiving a BA in 1966 he returned to Canada and took a job with the Toronto Assessment Department.
His first novel, Daddy's Darling Daughter, was published by Simon & Schuster of Canada in 1974 and sold well as a mass market paperback. Wanting to break new ground with writing he now embarked on a period of experimentation, that included an intense involvement with theater, but kept running into a wall. Eventually a brother living in Vancouver helped get him a job in the seafood business, and he fell in love with this different way of life. He had a fish boat for a few years, and then became a longshoreman.
In 1995 he completed an accelerated journalism program at Vancouver's Langara College and that fall took a night school class at the Vancouver Film School. The instructor was a charismatic Hollywood screen writer, and these evenings were magical for Thomas. By the end of the course he'd outlined some very interesting stories.
Now a full time writer, Thomas has entered a stage where things have come together. Two highly innovative series, one sci-fi, and the other thrillers with paranormal elements, are well under way. His original dream of breaking new ground with works of high quality, is today's reality. 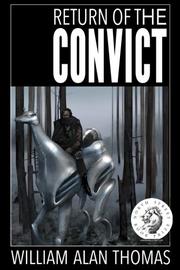 Return of the Convict

In Thomas’ sci-fi novel, a dying renegade returns to Earth from a Mars penal colony to connect with his secret ward—a young man undergoing cyberenhancements to take his place in tomorrow’s elite.

In 2143, after the convulsive wars and climate-change disasters of the Sixth Great Extinction, Earth has largely been taken over by a one-world government spearheaded by the Indian people, who have also developed a breakthrough quantum computer, the Raina, which they’ve begun to worship as a goddess. Lucas Rivera ran afoul of government oppression by acting as a “ferryman,” getting thousands of refugees to safety during the worst years. Sentenced to a Mars penal colony, where he acquired terminal cancer from radiation, the resourceful Lucas later returns to Earth to ruthlessly eliminate some old cronies and to find Dom Tessier, a state-raised youth in the process of becoming a “T-Man” (or “transformed man”), part of a social elite being wired to telepathically interface with other T-Men and the Raina. Lucas has long been Dom’s secret benefactor, using his riches from his rescues to boost the boy’s status in the ominously changing new world—but the convict’s motivations aren’t altruistic. In this era of genetic wonders, elders like Lucas can effectively data-dump their consciousness into carefully prepped human hosts like Dom, effectively rejuvenating themselves. But what if Dom (who narrates in alternating chapters), for all his conditioning, doesn’t want to be Lucas’ new body? In his introduction, the author says that he used Charles Dickens’ Great Expectations as a template for this first novel in a planned series. However, readers who expend too much mental energy looking for science-fictional clones of Miss Havisham or Joe Gargery will miss out on a crackling, well-told story that also has faint aspects of Lois Lowery’s The Giver. Thomas’ prose is reminiscent of that used by Philip K. Dick in his Cold War–influenced tales of apocalyptic intrigue and features spare yet compelling descriptions of fearsome weapons, robots, seductions, abrupt violence, deaths, and betrayals. There’s also a complex moral argument, a courtroom drama, and ethical conundrums that will likely haunt readers well after they finish the closing chapter.

An exciting, thought-provoking, futuristic narrative that transcends its Dickensian-mashup origins.

Return of the Convict: Kirkus Star

Note: I'm almost finished a major rewrite of this novel. KGB psychiatrist Sergei Prokov loses the funding for the psychic warfare program he ran during the Cold War. An oil multinational hires him to work in New York. Jim, an actor, and Cathy, a math student, are hired by Sergei as remote viewers. They are to help infiltrate a California biotech firm that's developed a process that yields cheap hydrogen for clean fuel. As a ruthless hostile takeover unfolds, Jim and Cathy decide to join the opposition.
Published: Feb. 16, 2005
ISBN: 1-4184-2363-7