Jack writes Literary Fiction, Historical Fiction, and Suspense. He has lived and traveled the world from the Arctic to the southern reaches of Patagonia, and in his previous profession, he served in executive roles with some of the largest companies in the world. He interacted with government agents, gave private industry counseling to congressional leaders, and served on committees that planned for nuclear, biological, or chemical disaster.

Jack left the corporate world in 2006, and moved to his home in South America, high on a mountain in the Patagonian Andes. Now he writes gripping and inspirational tales of adventure and romance with frightening aspects of reality. The first in a series of novels and novellas, Where The Green Star Falls, was published in 2017, followed by Andalusian Legacy, and Mallorca Vendetta: A Lucas Martell Novel.

“From beginning to end, Stephens strings words together like a true artist, allowing him to paint not only striking scenery, but also authentic emotions. . .”
– Kirkus Reviews 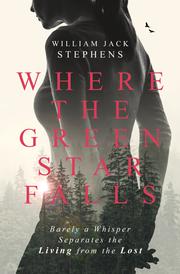 WHERE THE GREEN STAR FALLS

A man finally finds himself after tragedy turns his life upside down in this novel.

Nico Azzarà is obsessed with time and control, a fixation that allowed him to rise from rags to riches after his family emigrated from Italy to Buenos Aires. But his sense of control is suddenly torn from him when a vacation to the lush wilderness of Patagonia is cut tragically short by an accident that kills his wife and young son. Nico soon returns to the place of the crash, as wrecked inwardly as his crushed Mercedes. The first few days of his stay are recounted slowly as the devastation sinks in, and though his friend Jorge encourages him to return to the city, Nico refuses to leave the one place where he feels closest to the loved ones he lost. Days soon turn to weeks and then to months, with Nico surviving off of fish from the river and meager help from distant friends and strangers, including a kind man named Pablito, who patrols the forest. In time, Nico makes his camp more and more livable with supplies that come his way, and he begins to explore both the landscape around him and the feelings within him, searching for a purpose to continue his life. From beginning to end, Stephens (Business Life Eating Guide, 2016, etc.) strings words together like a true artist, allowing him to paint not only striking scenery, but also authentic emotions. Secondary characters and plotlines are less developed than the primary ones, but these problems only slightly detract from an otherwise captivating tale. The plot isn’t particularly fast-paced or action-fueled; rather, it’s unhurried, thoughtful, and emotional, much like Nico’s state of mind after the accident. Without being too heavy-handed, this story is replete with worthy lessons, such as the importance of treasuring relationships over riches, the powerful impact of true and patient friendship, and the value of pursuing your passions. The strong scenes and messages in this book will likely linger with readers long after they have put it down.

A beautifully crafted story about grief that portrays a rich physical and emotional environment.

Orphaned in the brutal streets of South America, the boy knew only a life of hunger and violence, until he was plucked from the cobblestone one day by a mysterious Spaniard. He became both father, and master to the boy who had known neither. Having fled Spain after World War 1 to live in exile, the Spaniard's intentions were clear; he was going to reclaim his fortune, and he needed an army to do it. The boy grew to become his most accomplished champion, and a feared young street soldier among the criminal gangs of La Paz. He knew nothing of the outside world, other than what his master told him, and had never seen anything beyond the barrio where he lived and worked for the Spaniard. And then one day, a beautiful young girl came into his life, abandoned like himself, and bought as a slave by his Spanish lord. She opened his heart to love, and opened his mind to a world he didn't know existed. As they stole away time together in the late hours of darkness, she shared stories of the land where she was born, Patagonia, and painted a picture in his mind of a life of freedom and passion in the southern Andes. They secretly hatched a plan to escape the violent world of the Spanish crime lord, and brave the dangerous journey to the End of the World. But in order to escape and find a life of peace with the girl he loved, he must first be willing to die, and ready to kill.
Published: June 15, 2018

The New Face of Vengeance... Lucas Martell was only seventeen-years-old when his life was turned upside down, and his family destroyed. At eighteen, he enlisted in the French Foreign Legion with only one wish; to become brave and strong. The Legion did more than that. They transformed him into a stone cold killer. After surviving twelve years of every hell hole in Africa, he receives news that his father was killed in an accident in the haven of the ultra-rich, Monte Carlo; and when he returns the dark truth unfolds. He discovers that all those years ago, he and his family had been drawn into a deadly game. A game of international crime and murder, slavery, and assassins. Now he's being drawn back into that game by the mysterious Fairhope Group, and groomed by a crusty ex-CIA operative who is old-school deadly. Lucas has a new mission; to bring the ultimate level of vigilante justice to men who exist in a world above the law.
Published: June 15, 2019
ISBN: 978-1093857887