William Peak’s debut novel, The Oblate’s Confession, returns us to that lost and mysterious time sometimes called “The Dark Ages.” It is based on extensive research into early medieval Northumbria and the writings of one of the most important, if less well known, figures in Western history, the Venerable Bede.

Peak received his baccalaureate degree from Washington & Lee University and his master’s from the creative writing program at Hollins University. He is communications manager for the Talbot County Free Library on Maryland’s Eastern Shore. Thanks to the column he writes for The Star Democrat about life at the library (archived at http://www.tcfl.org/peak/), Peak is regularly greeted on the streets of Easton: “Hey, library guy!”

In his free time he likes to fish and bird and write long love letters to his wife, Melissa McLoud, a professional historian.

“A vividly realized story of one boy’s attempt to live a life of faith in a time of war.”
– Kirkus Reviews 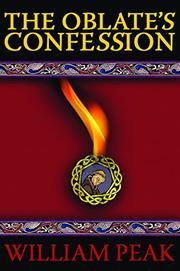 A debut coming-of-age novel set in a monastery in medieval England.

In Peak’s understated but entirely spellbinding debut novel, Winwaed’s warrior father, Ceolwulf, gives him as an offering, or oblate, to the monastery at Redestone, near the border between two warring kingdoms in seventh-century Northumbria. The novel’s central structure is that of a fairly standard bildungsroman, in which young Winwaed must learn the ways and rituals of the monastery, navigate the personalities of the various monks who have control over his life, and grapple with the inner struggles of a spiritual life. It also addresses the broader realities beyond the abbey’s fields, where war and plague stalk the land and where Christianity, newly come to the country, rests uneasily alongside native pagan beliefs that have held sway for millennia. With a sure hand and a formidable amount of research, Peak brings to life the day-to-day realities of the monastery, its food and drink, its dress, and its duties tied to the seasons. But Peak’s strongest suit is people, and his characters are unfailingly well-realized; for example, a protracted scene in which Ceolwulf and Winwaed have their first conversation is a masterpiece of insight. The novel is told entirely from a much older Winwaed’s point of view, and although this has the expected effect of sapping the action, Peak captures his characters’ inner dimensions so well that it more than compensates. In one beautiful little moment, for example, Winwaed looks out his window and sees an empty space where a cherry tree stood during his boyhood: “They don’t live long, do they, the fruiting trees?” he says. In his acknowledgments, the author thanks “first and foremost” the famed monk known as the Venerable Bede in a gesture that’s guaranteed to endear him to medievalists. Fans of the quieter moments in Ellis Peters’ Brother Cadfael novels, not to mention aficionados of Bede, will find a great deal to like in these pages.

A vividly realized story of one boy’s attempt to live a life of faith in a time of war.