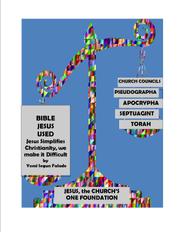 Falade makes the heterodox argument that the Bible as most Christians know it requires a severe redaction.

The author maintains that the only reliable verses of the Bible are quotations from Jesus Christ and verses pertaining to his life and teachings. Here he presents his own re-created scriptural text, preceded by lengthy introductory materials. Falade basically discounts the majority of the Old Testament, maintaining the veracity of only those few verses that either portend the coming of Christ or are directly connected to the teachings of Jesus. Likewise, large portions of the New Testament are discounted. Though he has admiration for those who passed Scriptures down through the centuries, he believes scholars and church leaders unnecessarily added to an otherwise perfect collection of “Canonicity,” as he puts it, which he refers to as “the Bible Jesus used.” He goes on to claim that he is “perfecting” the Bible in his efforts: “Perfecting means ridding the texts of attributes that are not consistent with the divine nature of the Christ.” Falade cites hundreds of verses and statements that he considers inconsistencies. (For instance, in Matthew and Luke, Jesus says he came to bring not peace, but a sword; yet in John, Jesus says “In me you have peace.”) This revised version includes a variety of quotes from and references to the Old Testament and to the sayings and actions of Jesus. The final product, according to the author, is shorter than the original four Gospels, and only 2 percent of it is based on the Old Testament. Falade’s verbiage is highly cluttered and hard to follow, and a thorough edit of his introductory pages would make his subsequent material much easier to understand. Though other modern scholars have attempted to identify “the historical Jesus” or a core of authentic Bible verses (e.g., The Jesus Seminar), Falade’s own methodology for saving certain portions of Scripture and discarding others is simply unclear, opening him up to criticism by academics and lay readers alike. Nevertheless, the author has labored through an extremely close reading of the Scriptures and displays a high level of knowledge regarding the intricacies of Jesus’ teachings and the Bible as a whole.

A simplification of the Bible that needs a thorough edit. 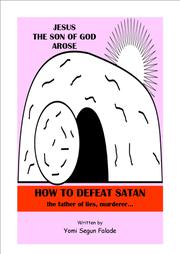 HOW TO DEFEAT SATAN

A Christian guide focuses on Satan’s nature and activities in the Old and New Testaments and delivers insights on detecting and defeating him in daily life.

The text of this Christian scriptural manual is color-coded for the convenience of readers: red for biblical quotes attributed to Jesus, green for quotes from angels, and pink for quotes from God the Father. Falade (Footprints of Jesus Christ, 2005) quotes liberally from the Old and New Testaments in order to paint the fullest possible composite picture of how Satan is portrayed in the Bible. Every appearance of Satan is cited, quoted, and analyzed to varying degrees, all with the aim of outlining the devil’s nature and strategy. The author builds on these references with speculations about what this means for the Christian faithful. Satan’s only weapon in opposing believers, Falade maintains, is to “erode our faith in the Son of God and turn our minds to worldly and devilish affairs.” To underscore this, the author cites examples throughout Scripture where Satan is being deceitful and manipulative. A main idea offered in these pages is that the devil’s most potent enemy is God’s law, to which Falade sees earthly parallels. “Isn’t it amazing that as big as the world is, it is being effectively managed by a comparatively small amount of rules or laws most of which emanated from the Mosaic laws or forerunners.” (The enormous swaths of the globe currently under Islamic or Chinese law are hardly mentioned.) It is the structure of this law that reins in the devil: If one word of “the letter” of “the Old Testament could curb Satan, how much more lethal to Satan will the Spirit Word of the New Testament be?” The book is at its strongest when meditating in this way on the nature of Satan as described in Scripture; far weaker are the lengthy sections simply recounting off-topic episodes from the Gospels.

A comprehensive and scripturally literate look at the biblical Satan. 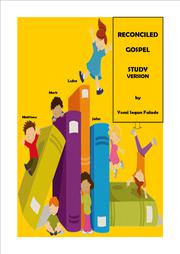 A writer offers an edited, single-book version of the Gospels in order to provide a simplified version of Jesus’ teachings and life.

In his previous book, Falade (Bible Jesus Used, 2018, etc.) argued that the standard Christian Bible gets away from its core purpose: to present the life and lessons of Jesus. This work represents the realization of that argument, as it reformats the Bible by removing all non-Jesus materials and condenses the four Gospels into one chronological narrative. The author has dispensed with traditional book names and chapter-and-verse numbering, developing his own organizational structure and numbering system. The first book, simply called “INTRODUCTION,” includes information on Jesus’ ancestry as well as the stories of the birth of John the Baptist and the Annunciation. The second book, “BIRTH AND CHILDHOOD,” deals with those two portions of Jesus’ life. In this manner, Falade is able to communicate the entirety of Jesus’ life and teachings in about 150 pages. Particular attention is paid to the quotes by Jesus from the Gospels, which appear to be included in their entirety. When Falade has to synthesize the accounts of multiple Gospels, he does so in a prose that sounds sufficiently biblical that readers may not be able to differentiate between his own writing and Bible excerpts: “Leaving the synagogue, Jesus, James and John went to Andrew and Peter’s house, where Peter’s mother-in-law was in bed with high fever. On hearing this, Jesus went to her, rebuked the fever and pulled her up by the hand. The fever left, and instantly she rose and served them.” The earnest and ambitious book is similar to other essentialist versions of the Gospels, such as Thomas Jefferson’s famous The Life and Morals of Jesus of Nazareth (though Jefferson excluded the miracles and exorcisms, and Falade does not). But readers unfamiliar with Falade’s other work will likely be confused by this volume, as it offers no explanation of what it is or how it was composed. The author uses many different color-codings for various sections of the text, but these, too, are unexplained. Without more context, it’s difficult to see why a believer would prefer Falade’s version.

A lean but vaguely defined rendering of the life of Jesus. 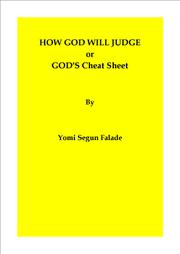 HOW GOD WILL JUDGE OR GOD'S CHEAT SHEET

Christians believe that God will be their ultimate judge—but by what parameters will he make his judgment? Falade offers this short “Cheat Sheet” to fill readers in on how he believes God expects people to behave: “The knowledge of good and evil may not have been innate to humankind,” the author writes in his preamble, “but after s/he acquired it, it came with the responsibility to be judged each and every time s/he does not choose good over evil.” Using the Bible as his basis, Falade discusses such issues as God’s objectivity toward all people, the essential dichotomy of God and mankind, and the various types of conscience—which, Falade argues, is the “bridge” that connects God and human thought. Other topics include the devil, the nature of evil, the purpose of Jesus’ crucifixion, and the Last Judgment. The author offers frequent quotations from Scripture to support his positions, such as Acts 17:31, which describes how Jesus gained the right to judge the world by being resurrected. The author also includes his own commentary: “If God did not spare his own self the punishment in permitting evil into the world, why would he spare anyone who commits evil? He still insists on individual accountability of everyone’s actions.” As with his other works, Falade effectively reveals his deep engagement with his subject. However, casual readers will be able to find more accessible options regarding these topics. Falade isn’t a master explainer, and although the book initially appears to be intended for a general audience, readers will require a strong familiarity with the topics at hand to follow his arguments. He also includes some idiosyncratic material, including an overly cute discussion of “consciousness” versus “conscience-ness” and a chapter on near-death experiences.

A short but somewhat esoteric discussion of God’s expectations.