Zoran Perisic, a filmmaker and author, received an Oscar and a BAFTA Award for his Visual Effects work on Superman - the Movie. He is also the recipient of the Scientific and Technical Achievement Award from the Academy for the development of the Zoptic Front-Projection System - the principal method used to make Superman fly in Superman 1, 2 & 3 and, as inventor of the Zoptic VFX system, is known as the man who made Superman fly.
He has worked as a Visual Effects Supervisor or Consultant on numerous productions; directed feature films and TV programs and is the author of four technical books published by Focal Press including Visual Effects Cinematography. He has several patents to his credit including Z3D System for Stereoscopic Cinematography.
He attended Birmingham University (UK) and Belgrade University (Serbia) and now divides his time between Los Angeles and Cornwall (UK)
He is a member of the Academy of Motion Picture Arts and Sciences.
His passion is flying – not only in Visual Effects but also as a private pilot. So it is not entirely surprising that An Alien Called Freddy is about a boy who can fly. 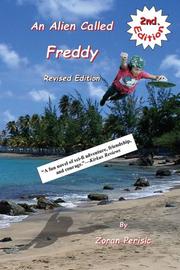 In a sci-fi story for middle-grade readers, an unlikely alliance forms between two adolescent boys and a tiny alien with a chatty computer.

Young Peter has high hopes for a family trip to Toruga Island near South America, where his father, Scott, has taken a job. His parents’ marriage is troubled, and maybe a tropical vacation will improve it. But his mother, Barbara, is unimpressed with the island—and particularly with her son’s claim to have seen a UFO falling to earth there. Peter later finds a small metal disc on the beach which turns out to be an alien ship that sprouts legs and windows. Via the craft’s irascible talking computer, he establishes communication with the diminutive female alien pilot, whom he dubs “Freddy.” She’s inquisitive and plucky, and her ship has amazing abilities, including enabling Peter to fly. The boy reveals his discovery to his new friend, Andreas, who recently lost his father in a terrible boating accident as well as his own ability to walk and talk. But when it turns out that modern-day pirates have awful plans for the parrots of the South American rain forest, the kids and the aliens team up to fight back. This is nonfiction author and visual-effects artist Perisic’s (Special Optical Effects, 1980 etc.) first novel, and it’s a captivating ride. Peter is an engaging protagonist who’s adventurous, curious, and kind as well as heroic when the occasion demands. The plot device of a tiny but personable alien—in a ship small enough to be hidden under Peter’s shirt—adds a new dimension to the familiar storyline of a secret friend from another planet. Perisic keeps the pace moving as the narrative expands in unexpected directions, touching on a number of serious issues, including disability and ecology. Readers may wish that the book were a little longer so that it could have expanded upon some relatively unexplored elements, such as Freddy’s home world, but all in all, it’s a satisfying, compelling read.

A fun novel of sci-fi adventure, friendship, and courage.