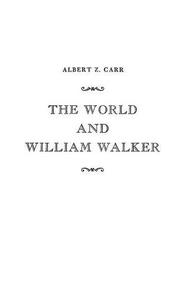 THE WORLD AND WILLIAM WALKER

The protagonist of this long and complicated biography by the author of The Coming of War, etc., is an almost forgotten mid- 19th-century American filibuster, William Walker, who set his mark on Central America, tangled with millionaires and empires, and died before a firing squad. Termed by the author ""a political phenomenon, a knightly hero and a ruthless power-seeker"", Walker, undersized, romantic, brilliant and abnormally moral, was born in Nashville in 1824, studied medicine and law, and at 24, as editor of the New Orleans Crescent, was preaching Manifest Destiny and American intervention in Cuba and Central America. The shortest route to the California gold fields, across Nicaragua by ""Nicaragua Transit"", was controlled by Commodore Vanderbilt, who dreamed of digging a canal across the Isthmus; in 1855 Walker, who cared not for Vanderbilt but who shared his dream, seized Nicaragua with 58 men and made himself dictator. Advocating the establishment of a slave state in Central America, Walker, deeply involved in American politics, became a villain to the North and a hero to the South and was detested in Nicaragua. After an attempt to invade Costa Rica in 1860, he was captured by the English while trying to annex an island off Ronduras; his captors turned him over to the Hondurans, who shot him. These are only a few highlights in the career of an astonishing man; unfortunately both the man and his career are obscured by the mass of detail in this weighty and almost too well documented volume.