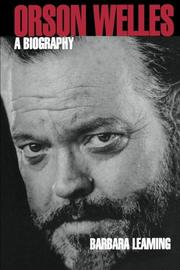 A distinguished gift to American arts and letters, Leaming's biography is the serious, affectionate big book that hungry Wellesians have awaited for decades--though it is still too slim at nearly 600 pages, with many legendary anecdotes lopped off. The first half, especially, is filled with new material that could have come only from Welles himself in midnight chinning sessions with his biographer. This is about the man, not his works. The man begins as the Wisconsin wunderkind, an infant who at 18 months explained to Dr. Maurice Bernstein, ""The desire to take medicine is one of the greatest features which distinguishes men from animals."" Dr. Bernstein is so bowled over by baby Orson (whom he calls Pookles) that he immediately takes on his artistic development, giving him a violin, paints, a puppet theater, a baton and classical records, soon lands him a walk-on stint in Samson and Delilah and as Cio-Cio San's lovechild ""Trouble"" in Madame Butterfly. Childe Orson finds attention-getting in grand opera irresistibly enthralling. Since everyone expects him to be a genius, be assumes he is and behaves accordingly, enjoying one of the most privileged golden childhoods ever recorded (filled with world-renowned visiting artists) while gobbling down Shakespeare, performing Lear and even as a three-year-old conducting himself as an adult. The rest is anticlimax as adolescent Orson--impelled to fulfill the world's colossal expectations of him--takes over the Todd School for Boys, rebuilds its theater department, mounts dozens of classics (even playing the Virgin Mary in one). Orphaned, he sails alone to Ireland at 15 for a sketching tour, tells the Gate Theatre players in Dublin that he is an old ham from the Theater Guild back in New York, and is hired for a starring role in Jew Suss--which is staggeringly successful and earns him plaudits even in The New York Times. By 19 he has written two big unproduced plays, published a scholarly best seller on Shakespeare, become the most famous radio actor in history (in part as Lamont Cranston, The Shadow), and with dizzying virtuosity mounted a meteoric string of smash Broadway hits. Ahead lie the Martian invasion scare (which elevates him to world-fame rivaling FDR's), Citizen Kane, The Magnificent Ambersons, Touch of Evil and Chimes at Midnight--not to mention his 13-year work in progress, The Other Side of the Wind, which is now in the clutches of Khomeini's Iranian financiers. Little of this fulfills the hot dreams which the ambitious 14-year-old once hoped to achieve. Throughout shines a shy, soft-spoken heart-thief, who is sometimes a supposedly irresponsible, womanizing glutton known as ""Crazy Welles."" Perhaps after Leaming that will change as the world takes a sober look behind the public mask (""I regard it as an enormous and articulated marionette, which is standing in the hallway waiting for me when I am called to do a job""). What we miss herein is the demonic furnace of Welles at work, guiding his actors, pushed by his furies. Ills superhuman radio career, scanted here, deserves a book in itself--one that has never been done. May Learning return.