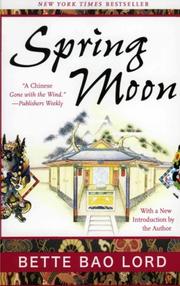 Lord, author of the autobiographical Eighth Moon, is a native of China who's lived in America since 1946; and her 20th-century dynasty novel so diverts, pleasures, and instructs with decorative cultural addenda (in glossy, uncluttered prose) that it doesn't seem to matter too much that the characters emerge from such a cool, calculated, pictorial distance. Lord follows the House of Chang, a wealthy Chinese family of Soochow, from 1892 to 1972--starting with the death of the House Patriarch and the choice of a new Patriarch. He is Bold Talent, called home from his studies in America, where he'd begun to have misgivings about the irreconcilable alien nature of Western thought--""infinitely more alien than railroads and reapers, infinitely more difficult for China to absorb."" And Bold Talent will be a thoughtfully, carefully moderate Patriarch, sensitive to the complexities of tradition, aware of the inevitable failure of Imperial rulers who are chosen ""on the basis of eight-legged essays and poems they write by rules laid down in the philosophy of the ancients."" Meanwhile, however, the Patriarch's younger brother--Noble Talent--will become a revolutionary: as the corrupt Manchu rulers waver in the threat of a foreign invasion, he joins a Reform group studying Western ideas; he barely escapes the fanatic Harmonious Fists (turn-of-the-century precursors of the Red Guards); he eventually survives to fight, however reluctantly, with the Kuomintang. And amid all these cymbal clangs of political crisis there is a grace note: pretty, graceful Spring Moon, niece and student of patriarch Bold Talent. But when Spring Moon's gentle husband dies in a political purge, the grieving widow also becomes her uncle's lover, and her two children (by different fathers) will represent two contrasting forces in modern Chinese history: Lustrous Jade, the daughter of her marriage, will become a Communist warrior as the Chang fortunes wither and the Republic falters; and Enduring Promise, the secret son of Spring Moon's love with Bold Talent, will eventually effect a reunion of the decimated House of Chang in a hostile China . . . as Spring Moon, now 90, leads five generations to a gathering at the crumbled family tombs. With copious snatches of Chinese history, poems and folk tales, rituals leavened with warmth, humor, and nostalgia--a gently engaging saga which offers attractive echoes of Pearl Buck as well as an agreeable sheen all its own.