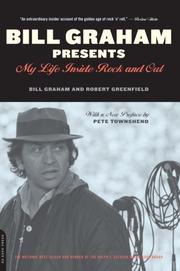 BILL GRAHAM PRESENTS: My Life Inside Rock and Out

Fascinating story of the rock impresario, who led many lives to the fullest. Graham (1931-91), raised in a Berlin orphanage, was sent to the US at age 11, fleeing the pogrom. After serving in Korea, he was an actor, Latin dancer, motorcycle vagabond in Europe; and waiter at the Concord resort hotel--where he undertook his first entrepreneurial project, running an undercover crap game for the guests. Moving to San Francisco, he helped organize the first Trips Festival, with the Merry Pranksters, Big Brother, and the Warlocks (later the Grateful Dead). Graham, who knew only Latin music, opened the Fillmore auditorium and booked acts by asking bands, ""Who is your favorite musician?"" He soon became a favorite among musicians as an honest promoter who paid generously and treated them royally. Greenfield (The Spiritual Supermarket, 1975, etc.), who has constructed his book entirely through first-person voices, puts its heart in the 60's and in the Fillmores East and West. Graham, Owsley Stanley (infamous LSD chemist), Jerry Garcia, other musicians, and Graham's longtime employees here relate what's perhaps the most engrossing collection of anecdotes ever assembled about the era. Especially wonderful are Graham's descriptions of Ike Turner with his pearl-handled revolver clearing the way through a riot for an ermine-clad Tina; of how, for four years, the Grateful Dead tried every devious way they could think of to get Graham high on acid (and finally succeeded); and of Otis Redding in his first performance before the Flower Children. Graham went on to manage tours for such groups as the Rolling Stones and Bob Dylan and to organize Live Aid and other world benefits. He died in a helicopter crash at age 60. Tremendous fun for rock fans and an affecting portrait of an extraordinary man.