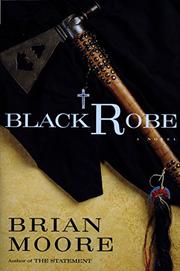 Don't be put off by Moore's dry, rather classroom-like introduction to this lean, powerful theological novel about a 17th-century Jesuit missionary in New France: ""From the works of anthropologists and historians. . . I was made doubly aware of the strange and gripping tragedy that occurred when the Indian belief in the world of night and in the power of dreams clashed with the Jesuits' preachments of Christianity and a paradise of death. This novel is an attempt to show that each of these beliefs inspired in the other fear, hostility, and despair, which later would result in the destruction and abandonment of the Jesuit missions, and the conquest of the Huron people by the Iroquois."" Yes, Moore's novel demonstrates all that--but it does so with a remarkable, un-didactic blend of stark drama and disturbing complexity. Father Laforgue, a French ""blackrobe"" (the Indian word for priest) who has been trained in Montreal, is about to set out on his dangerous first mission: he must journey to remote Ihonatiria, to assist (or replace) two Jesuits threatened by illness and Indian violence; together with a 20-year-old assistant, workman Daniel, Laforgue is to travel the rivers with a large, friendly group of Algonkin Indians; he eagerly looks forward to ""that place where martyrdom was more than just a pious hope."" But, en route, Laforgue's sure faith will soon be challenged, shaken, gouged. Daniel, formerly devout, is revealed to be utterly, lustfully attached to Algonkin girl Annuka--with nightly sex-fests that appall, yet arouse, the shamed, self-scourging Laforgue. Though the Algonkins have promised super-powerful Champlain that they will guide ""the fucking Normans"" to Ihonatiria, their dreams and sorcerers--more commanding than fear or politics--convince them otherwise: Laforgue and Daniel are breezily abandoned mid-journey. Then, when Annuka's father nobly turns back, ready to fulfill the Algonkin responsibility to Laforgue, he (along with wife and son) becomes the richly un-deserving victim of a grisly fate: the Frenchmen and their Algonkin friends are promptly captured by Iroquois enemies; ghastly atrocities ensue; Laforgue is deeply disturbed by the near-saintly death of Annuka's father, who refuses baptism to the end. (""The word mercy, mercy, mercy, repeated itself like a meaningless stammer in his brain. What mercy. . . does He show to these Savages who will never look on HIS face in Paradise, these He has cast into outer darkness, in this land which is the donjon of the devil and all his kind?"") And, though Laforgue will survive to reach the grim mission at Ihonatiria, he will look anew, full of doubt and despair, on the verities of martyrdom and baptism, ""Savagery"" and salvation. Like the strongest work by Graham Greene, Shusaku Endo, and other restless Catholic novelists: disturbing, haunting storytelling--bringing the period-background to life with raw, bold strokes (the Indians' nonstop obscenity, the strikingly plain sex and violence) instead of thick upholstery.