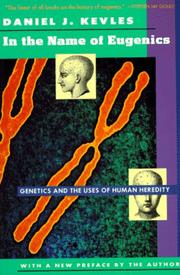 IN THE NAME OF EUGENICS: Genetics and the Uses of Human Heredity

Caltech historian of science Kevles, author of a meticulous probe of the hard sciences (The Physicists, 1978), has now--at the crest of renewed interest--produced a detailed chronicle of the eugenics movement in England and America. He starts with Francis Galton, that cousin of Darwin who coined the word ""eugenics,"" and alternately dreamed that the new science would become a secular religion and despaired of having the knowledge to make it so. Galton's fortune went to establish what became the Galton Laboratory for National Eugenics at University College, London. Kevles traces the line of descent from Galton to Karl Pearson to Charles Davenport and the sowing of the eugenic doctrine in America, particularly via the well-endowed laboratory and Eugenics Record Office that Davenport directed at Cold Spring Harbor, L.I. The decades from the turn of the century to the immediate post-WW II years fascinate Kevles, as they have other scholars of the movement (Alan Chase, Stephen Gould and, most recently, David Smith in his study of Henry Goddard and the Kallikak legacy, p. 233). Kevles provides more biographical detail--interesting fodder for those caring to speculate on how bleak home environments (relentlessly stern, amibitous, or pious parents appear in excess) may have influenced the zealous pursuit of eugenics. Kevles himself is keen to point out the divergent appeal that eugenics held for liberals, reformers, and radicals--the Webbs, GBS, Emma Goldman--as well as for avowed racists, WASPs, and ultraconservatives. At the same time he traces developments in the human-genetics work of J.B.S. Haldane, Lancelot Hogben, Julian Huxley, and Roland Fisher that helped to shape the modern evolutionary synthesis and to bury simplistic theories of the inheritance of criminality, prostitution, and the like. The story is brought up to date with discussions of advances in identifying genetic disease, the Jensen and Wilson controversies, and the most recent work in gene linkage studies, amniocentesis testing, and genetic counseling. The irony of the ""new"" eugenics is not lost on the author, who concludes that the potential for gene replacement therapy, not to mention manipulations involving in vitro fertilization and surrogate mothers, has re-opened issues of eugenics/dysgenics that we have hardly begun to resolve. Lengthy notes and an essay on sources make this exemplary text an invaluable reference as well.