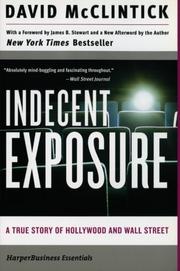 INDECENT EXPOSURE: A True Story of Hollywood and Wall Street

The David Begelman scandal--he admitted forging checks and embezzling funds while studio president at Columbia Pictures--told with such abundant inside detail that film-industry readers will look over their shoulders. McClintick opens with a fascinating account of how actor Cliff Robertson's insistence on straightening out a minor financial mystery first brought Begelman's improper acts to light. But that's just the beginning of the story. The point man in the unfolding drama was Alan Hirschfield, president of Columbia Pictures Industries, the publicly-held parent of the studio. When the scandal broke, Begelman took a forced leave and Hirschfield (a Wall Street type, not brought up in the movie business) wanted him out for good: ""We cannot have a forger and embezzler in this company, whatever the extenuating circumstances."" Bizarre as it seemed (especially to outsiders, like the SEC), this was a minority view on Columbia's board, where pro-Begelman sentiment ran high. Some supporters felt Begelman was a sick man who should be given a chance (he had to be sick, they said--why else steal so visibly?). Others, especially in light of early press reports referring vaguely to ""unauthorized financial transactions,"" viewed Begelman as being pilloried for routine expense-padding. But there was old-fashioned power politics at work, too. According to McClintick, producer Ray Stark, a major behind-the-scenes figure at Columbia, not only pooh-poohed Begelman's offenses (""It isn't that much money"") but made it clear to Hirschfield that his own continued association with the studio hinged on Begelman's reinstatement. And, says McClintick, Begelman partisans spread the word that the whole affair was a Hirschfield ploy to take over the studio himself. Subjected to tremendous pressure and with virtually no support on the board (""I don't worry about [the shareholders],"" said one board member. ""The first thing is to be loyal to your friends""), Hirschfield agreed to reinstate Begelman (thus temporarily saving his own job), then got the board's axe himself when press and law enforcement probing forced Begelman, by then indicted, to resign. A true Hollywood ending: after a wrist-slap sentence, Begelman landed on his feet as president of MGM; Hirschfield wound up at Fox. Though McClintick may be attacked as pro-Hirschfield (one guesses his sources were in that camp), his marshaling of detail--the play-by-play of the Columbia board meetings, for example--is awesome. Sure-fire reading for anyone interested in the business of movies.