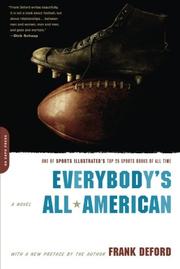 The pathos of the ex-sports star who lives in the past has by now become a book/movie clichÃ‰; and Sports Illustrated editor Deford (The Owner) ends up by tossing in just about every ironic, tear-jerking gimmick that goes with the territory. But before this novel slides into melodrama, it offers lots of regional-comedy pleasure--as wry narrator Donnie McClure sketches in the salad days of his young uncle Gavin Grey: halfback All-American Adonis at Chapel Hill circa 1954, nationally known as ""The Grey Ghost,"" seen on The Ed Sullivan Show, and engaged to gorgeous Babs, virginal Blueberry Festival Queen. Donnie, teenage confidant to the not-very-bright hero, recalls the night Gavin put out a fire at a Sigma Nu bash (secretly crying from sheer fear) and the night Gavin ran a race against unknown black football-star Narvel Blue (to whom Gavin passed along the complimentary Impala he got from snaky car-dealer Bolling Kiely). He recalls Gavin's all-consuming pro-ball career with the Redskins--when mother-of-three Babs turned to embarrassed, aroused Donnie for platonic company (they did The Twist together, went skinny-dipping). But Donnie also starts shading in Gavin's decline, beginning with the failure of his Grey Ghost Inn restaurant, thanks to partner/pal Lawrence--who's murdered and exposed as a crook. Disillusioned, Gavin becomes a kamikaze player, gets hurt, must retire, makes desperate comebacks, but is reduced to such jobs as restaurant host (for slimy Kiely) and assistant golf pro. Meanwhile, Babs rebels, has one night of adultery with Doanie (""My God: me inside of Babs Rogers. The Blueberry Queen""), and grabs the real jobs that Gavin can't do. And after Gavin is caught in bed with Kiely's wife--a shoot-out and front-page scandal--it's downhill all the way to 1979: boozing, philandering, dwelling on the past, dreaming of making a TV commercial (which happens, in fact, but humiliatingly), impotence, and virtual suicide. Unfortunately, these final chapters are largely unaffecting--because the incidents are too cornily familiar, because Gavin is never a three-dimensional character, because Deford's broad farce mixes poorly with the sentimentality. And attempts to beef up the legendary-hero theme with excerpts from Donnie's biography of Jeb Stuart fall flat. (Someone should have told Deford that Barry Hannah has done similar tricks with ol' Jeb ad nauseam.) But all along the way Donnie's narration bubbles with likable folks, natty period details, and well-turned observations--enough of them to make this uneven comedy-drama a comfortable, gently raunchy diversion, especially for readers with gridiron memories of their own.