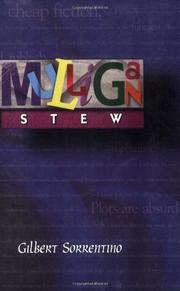 Sorrentino's fiction may require some adjusting to. Forget about empathy, verisimilitude, ""sincerity,"" and such--but what an avalanche of vaudeville, parody, racket, obsessive junk, and literary homage! In this new novel, the sourdough crust that gave shape to Sorrentino's Imaginary Qualities of Actual Things (the dissection of a bunch of rotten New York bohemian artists) cracks apart totally, splattering the oven--with a stylized, avidly chewing attack on the publishing world. Anthony Lament, author of avant-garde novels that have either been ignored or reviled, is now desperately hard at a mystery story. His characters: victim Ned Beaumont, a publisher, dead in a lakeside cabin; and some suspects--Halpin (Beaumont's partner); Daisy Buchanan (yes, the same Daisy who loved Gatsby); and a pair of perverse femmes de Sade named Corrie Corriendo and Berthe Delamode. If this doesn't already give you some idea of the quality of Lamont's pathetic manuscript, Sorrentino generously gives us whole chapters, each lousier than the last, each in a different moribund literary mode and each reflective of the poor scribbler's fast unraveling mental condition. He sees the whole publishing world--academics, reviewers, publishers, even his writer brother-in-law--in cahoots to destroy his small, guttering light; and his paranoia isn't helped by the fact that even his characters keep diaries in which they bitterly complain about having to work inside such a crumb-bum book as his. (Why couldn't they instead have been Madame Bovary or Tristram Shandy, used once and then free to live off the residuals?) This notion is the book's out-and-out funniest, but only slightly less hilarious are the lists of book titles, answers to well-known rhetorical questions in song and story, a whole Jonsonian masque (""Flawless Play Restored: The Masque of Fungo""), fake interviews, silly names--all of which Sorrentino casually drops in like dumplings. This miscellaneous, naughty approach, which sometimes seems like an extended novena to Finnegans Wake and At Swim Two Birds, can often step beyond coy, into smug. Yet, the endless funning and flea-scratching should dilute most finicky objections. Sorrentino is reviving a form last current around 1591 with The Art of Cony Catching--literary pamphleteering--and he's doing it with wild arrows, infuriating ephemera, and a barrel of yocks.