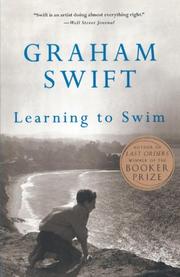 Eleven stories by the British author of the talented, uneven Waterland (1984), most of which appeared in London magazines a few years back. (One atmospheric but gimmicky piece--""The Son,"" about restaurant-owning Greeks in London--surfaced here in 1981's Short Stories from Punch 2.) Swift's style is fairly cool and clinical; the prevalent ambience is upper middle class; the recurring subject matters are doomed pairings, triangular relationships (often Oedipal), the several faces of jealousy and family bondage. In the title piece, a six-year-old boy is the terrified pawn in the low-key, constant jockeying for power between his petty, mismatched parents. The well-to-do twosome in ""Seraglio""--on holiday in Turkey--have an equally arid, blame-shifting marriage. And, in ""The Tunnel,"" the couple is very young, unmarried, living in rebellious sin--yet the narrator feels no less trapped than the husbands in the marriage stories, finding a metaphor for his situation in the absurd tunnel-digging of some boys in a nearby playground. (""They were trying to escape from a place they had entered--and could leave--at their own free will. Suddenly, I wanted them to succeed."") The stories of triangular tension tend to be even less subtle, sometimes agreeably sharp: ""Cliffedge,"" about a married man's love/guilt attachment to his retarded 33-year-old brother, slips into sentimental melodrama; ""Gabor"" is just a sketch, if a neat one, of the father/son jealousy that develops when the family adopts a Hungarian-refugee boy; but ""Chemistry,"" with two overlapping Oedipal triangles--the old father resentful of his widowed daughter's new husband, the grandson resentful of his mother's new husband--generates a sly, Saki-like interplay of lethal enmities. And two other stories stand out, too, in their light, crisp treatment of ironic, slightly complex premises: in ""Hoffmeier's Antelope,"" a zookeeper's interest in rare breeds frays into more primal, warped feelings of protectiveness, passion, ambition; and, in the faintly Kafka-esque ""The Hypochondriac,"" a smug doctor's uneasy relationship with his younger, pregnant (by whom?) wife is paralleled by his increasing rage at an uncommonly persistent hypochondriac of a patient. Rather chilly and somewhat thin overall--but polished, semi-serious diversions for a youngish, Anglophilic readership.