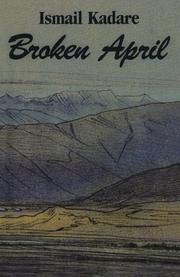 Haunting anthropological fiction about blood feuds in early 20th-century Albania. Kadare's insistent, inevitable narrative has the nightmare logic of a dream--as it brings together a man doomed by his culture and a honeymoon couple who meet up with that culture. Gjorg is a young mountaineer (the ""Accursed Mountains"") who is forced to kill a man in order to avenge his older brother's death. Until he does so, his mother has hung up the brother's bloody shirt, and his father has berated him: ""The blood is turning yellow. The dead man cries out for vengeance."" The death, once accomplished, dooms Gjorg, but by custom he may wander without fear of retribution for 30 days--the bessa, as the truce is called: ""What would he do in the thirty days left to him?"" While various figures here, mostly props to get the story told, elaborate on this medieval blood-feuding culture (of 200 households, only 20 are not involved in the feud), Bessian and Diana Vorpsi, the young honeymoon couple, arrive to study the customs of the region, including the blood feuds, and Diana's imagination begins to relive the events that have led to Gjorg's predicament even as she reacts against the Highland Code: ""You speak of these things as though they were bank transactions."" We get a guided tour through lords and castles, death taxes, and complex archival materials, a social system where every verdict--innocence or guilt--is decided in the context of the feud: what must be avenged, what can be forgotten. The new bride, enchanted by her visions, ends up stumbling into the tower of refuge--the only place where a man who has lived through the trace is safe--and stumbling out a near-zombie. The Vorpsis leave the area quickly, while Gjorg will wander into his fate. Kadare (Chronicle in Stone, Doruntine, not reviewed) offers powerful, old-fashioned fiction almost Dostoevskian in its dark vision.