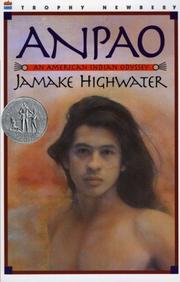 Highwater's subtitle, no idle choice, is a measure of his ambition in this ordering of traditional tales and elements around the wanderings of the invented hero Anpao (""the Dawn""). His story parallels Indian history from creation to white domination; and in the course of seeking his father the Sun, whose good offices are a prerequisite for Anpao's marriage to the maiden Ko-ko-mik-e-is, he comes into contact with various tribes and spirits, with bat people and sorcerers, with a farting coyote and a treacherous Deer Woman, with two youths who are turned to snakes or drowned by turtles, respectively (these episodes seem to be two versions of the same tale), with the Big Knives' (white men's) ""magic dogs"" (horses) and, chillingly, with smallpox personified. Early on Anpao splits in two, then later reabsorbs the twin so formed (Oapna--for emphasis, a contrary); and elements of what Highwater calls ""magic realism"" occur throughout. At one point Ko-komike-e-is and Anpao are sacrificed to save their people, and she becomes the first stalk of corn. This episode out of the way, however, Anpao goes on with his quest as if she were still back home waiting--and she is. Highwater was warned by fellow Indians, he reports, that whites might not understand such business--but one suspects that it is not the pre-literate world-view with its vision of transformations, etc., but the author's artificial sequencing of separate motifs and tales that makes such serious matters as dying seem totally lacking in consequence. In the end, the character Anpao, through a handy device, lends neither depth nor drama to the material. Nevertheless, HighWater has a firm command of his sources, and this is a serious, craftsmanlike work.