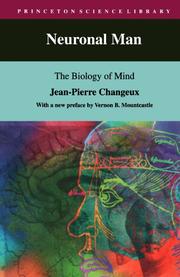 NEURONAL MAN: The Biology of Mind

The primacy of the neuron, the functional unit of the brain, and of larger complexes of neurons, is well-argued by French neurobiologist Changeux. Condensing a wide range of material, he first supplies a historical/philosophical perspective--which takes in a number of significant 20th-century French contributors (Flourens, Broca, Du Bois-Reymond). Successive chapters examine gross anatomy and species comparisons, the nature of both electrical and neurochemical nerve signalling, and the intricately structured layers and neuronal populations of the cortex. To illustrate function, Changeux draws upon extensive studies of birdsong, vision, language, and the various centers and circuits involved with vital functions and emotions (including some new material on human orgasm). Then he moves gradually into abstract thought, concept-formation and memory, consciousness and attention. All these complex activities or states, in his view, are built into the brain's structure in the form of multiple assemblies of neurons. These assemblies interact with incoming signals but are also capable of spontaneous activity. Matches with ""reality"" (resonances), and mismatches (dissonances), serve to strengthen or weaken particular circuits, thus facilitating the laying down of images, ideas, or memories. Random recombinations could yield novel thoughts or images. Elaborating on this theme, Changeux explores nervous system development, tracing events in embryo and their genetic underpinnings. Studies have shown that in the course of development many synapses and nerve endings are winnowed out--there is a kind of competition, and losers die. This phenomenon accords with Changeux's theory of ""epigenesis through selective stabilization of synapses."" Put simply, epigenesis involves the process by which larger assemblies of neurons come to form coordinated units. Some aspects of the theory are associated with the work of D.O. Hebb, others reflect some of the new, exciting studies of learning at the cellular level in sea slugs, leeches, and other primitive creatures. Changeux's final chapters provide both a survey of human and brain evolution and a rationale to explain (through changes in genetic timing or altered functions of a few key genes) how so much development could have taken place in only a few million years. Not for beginners, nor for those more interested in the latest theories of neurological diseases--but worth the attention of sophisticates for its probing into what makes the human brain human.