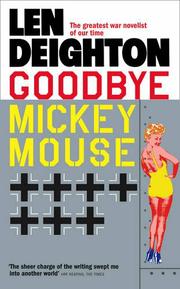 Deighton is, of course, a master of sprightly espionage--but his heart really seems to belong to WW II aviation (Fighter, Airshipwreck, etc.). And this leisurely, gently involving novel is an affectionate portrait of American fighter-pilots stationed in 1944-45 Cambridgeshire--with chunks of air-battle action, lots of air-base rivalry/camaraderie, and a number of off-base love affairs (one of which will lead to tragedy). The more-or-less central figure here is pleasant, impetuous, rather bland Capt. Jamie Farebrother, the newest pilot at understaffed Steeple Thaxted field and the somewhat estranged son of London-based General Alex Bohnen, US Army Air Force. (After his parents' early divorce, Jamie took his stepfather's name.) But, while Jamie falls in love-at-first-sight with sophisticated English girl Victoria, downs his first plane, and starts feeling the death-horrors of war, Deighton sketches in a large supporting cast of stereotype-or-better characters. The standouts: Lieutenant Z. M. (""Mickey Mouse"") Morse, a brash, very young, publicity-hungry super-pilot whose affair with good-time Vera, the wife of an absent war-hero, gets him grounded (""Mr. and Mrs. American deserve clean-living young men as heroes""); cynical, Mozart-loving, womanizing Vince Madigan, a PR officer who arranges parties, dates, and headlines back home for the pilots; the beloved base commander, earthy ""Colonel Dan,"" and his stuffier second-in-command; the martinet Group Commander, Major Tucker; and pilot Earl Koenige, who doesn't want to help bomb his parents' home-town in Germany. Thus, through most of the novel, the drama is primarily low-key and episodic--tensions and humor among the pilots, the officers, Jamie-and-his-pushy-father, Victoria-and-her-worried-parents--except when the actual missions are flown. And it's only in the final chapters that the Morse/Vera affair comes into focus (her jealous returning husband goes on a bloody, misdirected rampage) and that General Bohnen is faced with an agonizing decision: to save the life of wounded son Jamie . . . or to do what's best for the war effort as a whole. Not for fast-paced thriller fans, then--and air-battle buffs may find too much chat, too little action. But Deighton avoids most of the WW II-pilot-story clichÃ‰s, does a remarkable job with the American dialogue, and slowly builds toward the well-earned melodrama at the close--so there's steady entertainment here for those partial to a quiet, strongly authentic blend of romance, aviation, character, and atmosphere.