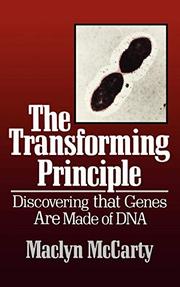 THE TRANSFORMING PRINCIPLE: Discovering that Genes are Made of DNA

Transformative research, at first hand. It's easy to forget that pneumonia--in particular lobar pneumonia caused by the pneumoccocus bacteria--was a major killer early in this century, and as such preoccupied bacteriologists and physicians. The bacteria could be cultured, moreover, and displayed a variety of traits that fascinated scientists: the microbes could self-destruct, for one thing, manufacturing enzymes that dissolved their own sugar-coated capsules. Bacteria without capsules were harmless, easily engulfed by white cells in an infected animal. Experiments in the 1920s showed, however, that bacteria without capsules could, under certain conditions, revert to encapsulated forms that were highly virulent. In essence, this is the phenomenon that Oswald Avery, Colin MacLeod, and Maclyn McCarty studied in the 1930s and 1940s at the Rockefeller Institute. Clinical applications--better pneumonia treatments--were never far from their mind. What they discovered, however, was that the ability of the bacteria to revert--the transforming principle--depended on the presence of nucleic acid, specifically DNA extracted from a virulent pneumococcal bacteria type. They inferred that they had discovered what genes were made of, and that a gene from one type of bacterium could be incorporated into a near relative to restore the relative's virulence. The results were published in 1944 at an unpropitious time--World War II--and in a journal not perused by geneticists. Nevertheless, the paper had its effects--on Erwin Chargaff, on Joshua Lederberg, and on Watson and Crick. McCarty's book is a painstaking account, largely based on laboratory records, of how the research proceeded, what the principals thought, and how the paper was received. There emerges a real sense of the spirit that drives laboratory scientists to repeat, improve, and refine their methods and so achieve reliable findings. McCarty reveals some bitterness toward at least one Rockefeller colleague who persisted in the belief that protein contaminants were the transforming principle. The varying personalities of the three principals register too. But this is overwhelmingly the work of a gentle man and scholar, wanting to set the record straight. It is a welcome addition to the history of science literature and a fine start to a new Commonwealth Fund series edited, and with an introduction, by Lewis Thomas.