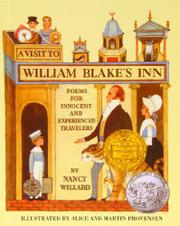 A VISIT TO WILLIAM BLAKE'S INN

Unquestionably a labor of love, this is set in an inn presided over by William Blake. There, dragons bake the bread, angels shake the featherbeds, a tiger, a rabbit, a bear, and other animals fill the rooms, sunflowers request ""a room with a view,"" and the only human guests we're introduced to are the little-boy narrator and ""the man in the marmalade hat""--who arrives ""equipped with a bottle of starch/ to straighten the bends in the road,"" then proceeds to ask for ""a room at the top."" The first of Willard's 16 verses begins, ""This inn belongs to William Blake/ and many are the beasts he's tamed/ and many are the stars he's named/ and many those who stop and take/ their joyful rest with William Blake."" The verses are laced with fancies but formally tidy, as are the Provensens' charming period illustrations, which give a quaint prim cast to such dreamlike phenomena as a flying carriage, a breakfast table balanced on a rooftop (breakfast is ""on the house""), and a parade of animals through the milky way, led by Blake, with the little boy astride the tiger. It's just as well that the Provensens' manner is poles apart from the visionary intensity of Blake's, but one wonders how Blake's work would inspire Willard to invoke his image and meter to such whimsical purpose. Still, the book is a visual pleasure, even beyond the illustrations, and the poetry accomplished, perhaps enchanting--as in "" 'Where did you sleep last night, Wise Cow?/ Where did you lay your head?'//'I caught my horn on a rolling cloud/ and made myself a bed,// and in the morning, ate it raw/ on freshly buttered bread.' "" It's a question of sensibility.