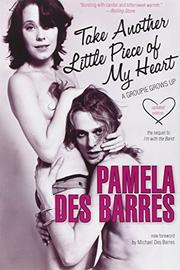 TAKE ANOTHER LITTLE PIECE OF MY HEART: A Groupie Grows Up

Gushing, not to say ecstatic, exercise in groupiespeak, and a sequel to Des Barres's I'm with the Sand (1987). Des Barres's follow-up to her days with the rock fabs begins as a rerun but soon settles into the downside of her glory days: adult life, more or leas, though the endless name-dropping requires a rock-'n'-roll directory. As the memoir begins, still-unmarried Pamela Miller, introduced on the Today show as ""Queen of the Groupies"" (""Wow. What a twisted and unique legacy. I never know whether to defend myself or take a bow""), is madly in love with drug-and-booze-ridden Michael Des Barres, a ""glitter-glam"" British rock star who has just helped form a new group, which flops. Insecure Mike and moaning Pam fly to jobs on both coasts and hop over to England to see Mike's parents. Pam's own group, Girls Totally Outrageous, folds, but Para runs about getting film parts (with Sly Stallone in Paradise Alley, among others) and finding entertainment niches for her talents. But ""the magic dust on the Sunset Strip bad turned into sticky wads of filthy goop that stuck to the bottom of my platforms."" Para and Mike buddy or room with burgeoning greats Don Johnson, Melanie Griffith, Tom Cruise, and others. Throughout, Pam keeps a diary (excerpted occasionally here), and at last marries bombed-out Mike and has a child. Eventually, Mike joins AA, which works for him, and by book's end is a tower of honesty--but not before he joins AA, which works for him, and by book's end is a tower of honesty--but not before he begins playing around during early sobriety, leading to an inevitable separation. Meanwhile, Para lands a big-time rock star (known here only as ""HIM"") and has a yearlong, super-private sex affair ""on this flaming rocket trip to the stratosphere."" Dumbfoundingly overripe musk, but just right for the right ears.