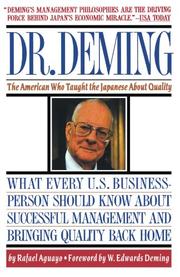 DR. DEMING: The American Who Taught the Japanese About Quality

Once a student and now a disciple of W. Edwards Deming, the octogenarian consultant whose preachments on quality assurance have, until recent years, been more honored in Japan than the US, Aguayo offers here an extravagantly reverential guide to his mentor's precepts. While the sometime banker has his facts straight about the deceptively simple Deming canon (which is based on statistical-sampling theory), he makes more sweeping claims for its efficacy than the originator. Aguayo does so, moreover, in unfailingly graceless, gratingly insistent fashion. By the numbers, Deming sets a demanding 14-point agenda for executives sincerely interested in renewing and transforming, not simply changing, their companies. His approach stresses cooperation as a productive alternative to cutthroat competition, constancy of purpose, building rather than inspecting quality into goods or services, minimizing total costs (instead of focusing on price), learning to control as well as to understand variation, and on-the-job training. Enterprises that embrace Demingism must be prepared to discard such time-honored industrial practices as management by objective, performance reviews, output quotas, and work standards; they also require genuine leaders willing and able to win the collaboration of peers, rivals, and subordinates. Ironically, Aguayo's true-believer interpretation of Deming's teachings is marked by quality-control lapses in both logic and syntax. Cases in point range from a failure to assess the implications of Japanese vendors' propensity for accepting losses in pursuit of market share, and the nontrade barriers that effectively bar gaijin exporters from their homeland, through the speculation that Deming principles, properly applied by the Federal Re. serve Board, could yield a kinder, gentler monetary system. Nor does the author's consistently awkward prose (""Once a skill is learned incorrectly, it cannot be altered economically, if at all"") enhance the appeal or utility of his text. Other appreciations of Deming and his doctrine are on the way. Pro tern, though, Andrea Gabor's The Man Who Discovered Quality (p. 1142) ranks as the best choice for lay readers seeking insight on the judgments of a designated oracle.