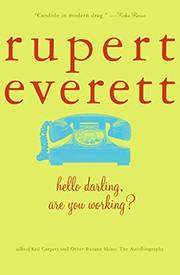 "HELLO DARLING, ARE YOU WORKING?"

Candide in modern drag: British actor Everett's first novel retails the naughty adventures of a pill-popping, omnisexual naif as he cruises a jet-set world in which everything, especially him, is for sale. Still smarting from his childhood discovery of the male member that will prevent him from becoming a Great Actress, and warmed by his fonder memories of his early days as a precocious male prostitute, onetime soap-opera star Rhys Waveral is living on, and living it up, in a suite at the Hotel Leicester in Paris--until his father, Brigadier Dimbleby (""Dim"") Waveral, phones with the news that Rhys's financial advisor, ""that bloody deviant, Gavin Winterton,"" has just sold him short in the stock market crash of '87. What to do? With stoic sighs, Rhys (a.k.a. Dorhys, Dorita, Lady Beth Fraser, etc.) runs off on his lovely, accident-prone wife Adrienne to return to his old profession, agreeing to accompany hideous Rikki Lancaster, ""the Duchess,"" and her lesbian medium companion, Elida Schumann, to Tangiers for a week of torrid, expensive passion. As Dim takes off for Paris to have it out with his wayward son, and Rhys's friend Peach Delight takes it on herself to dazzle him with Ecstasy and dÃ‰colletage, Rhys plunges into a furious carnival of grotesques--from Sir Maurice Goodbuns to Little Beige Riding Hood--all coming together (so to speak) for a memorable climax at Ashby de la Zouche's costume extravaganza, the 1988 Fruit Ball. Since Everett hasn't Joe Orton's command of the mechanics of farce, Rhys's riotous, in-your-face odyssey finally comes across as sad and a little boring. But readers hungry for the latest sex-and-drugs update on the too-too beautiful people, darling, could make this a hit anyway.