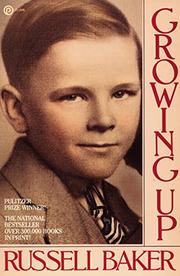 If you're expecting a bouquet of gentle, column-style whimsies from Russell Baker's childhood, forget it. This memoir--shapely, taut, tough--is dotted with Baker-esque laughter, to be sure; but it is more often bleak and quietly fierce, as Baker (framing the 1925-1946 past with 1970s visits to his senile mother) recalls the subtle shadings of Depression poverty . . . and of mother/son love at its most demanding. Mother was a schoolteacher, a take-charge type determined to ""make something"" of her men. Baker's father--a rural Virginia workman--was a disappointment: he died young, a hard-drinking, unreformable diabetic. (""After that I never cried again with any real conviction, nor expected much of anyone's God except indifference."") So, abandoning one of her two daughters (adopted by in-laws), Mother took Russell and sister Doris off to her kin in Newark--where Russell's lack of ""gumption"" was dismayingly apparent in magazine-selling efforts. And always counterpointing Russell's efforts to please (good grades, gifted writing), there's Mother's yen for a home of her own, for freedom from family support: one suitor, the hapless Oluf, went off looking for a job, writing pathetic letters that form the most heartbreaking chapter here (""I tried to raice anof money so I could go over Home, but so far I diddent . . . so I am asking you to stop writing to me, because I am not interested in anything any more""); Mother's brothers include two Depression standbys--the pipe-dreaming talker, the defeated stay-at-home; and yet another move to still other relatives brings first the humiliation of being ""on relief"" (Russell and Mother hide a wagon-load of surplus food under their coats), then financial salvation--in the form of new stepfather Herb. (""I set out on one of those campaigns of silent resistance of which only adolescents and high-spirited nations under conquerors' occupation are capable."") True, the later sections here are somewhat more conventional: Russell's comic stumbles (primarily sexual) as a G.I. But the windup is fight in tune--his marriage to a woman of whom Mother silently disapproves--and, throughout, Baker manages to evoke the Depression world of extended families and pressured expectations with a beguiling, touching blend of irony, warmth, and (most surprisingly) tremendous sadness.