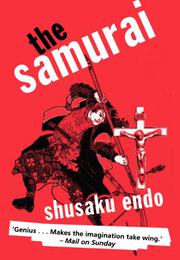 Through the recent English-language publication of a series of brilliant novels, Endo has quickly become recognized as the most subtle-yet-devout writer of Christian fiction in the world today--one who uses the Japanese character (and its problematic fit with Christianity) to jimmy out extraordinary levels of ethical and religious dilemma. And here again, as in Silence, this delicate tension is given further nuance by the historical setting. In the company of a Franciscan missionary, a number of Japanese--including three samurai, Tanaka, Hasekura, and Nishi--set out in shogunate-sponsored boats early in the 17th century, headed for Nueva Espana (Mexico) in search of new trade opportunities. In Mexico, however, the Japanese are ignored. So they eventually go to Spain to make their trade pleas--but there they again meet opposition, this time from the Jesuits (mortal enemies of the Franciscans). Next, then, to bolster their case (and that of their Franciscan guardian), the samurai convert to Christianity . . . without really believing. And when even this gesture fails to win over the Spanish, the Japanese travel to Rome--where the Jesuits are once more in control: the Pope hears out the case of the Japanese but will lend no support. Finally, therefore, the group takes a futile return-trip to Mexico, then trudges home to Japan: samurai Tanaka--having been shamed by the failure of his mission--is a suicide on the boat; the others return only to find that, in their absence, the new Japanese emperor has banned Christianity and Christian missionaries; the Franciscan is jailed, executed; the surviving samurai are disgraced. And only then do the samurai actually begin to believe in Christ, a Christ who ""listens to our agony and grief. He weeps with us."" The end is tragic; the nature of faith here is adverse, found in misery and sympathy. But, though slow to begin, Endo's novel eventually overflows with desperation, cultural duplicity and humiliation, trial--and this is serious, theologically-charged fiction of the highest quality: full, bleak, richly particular.