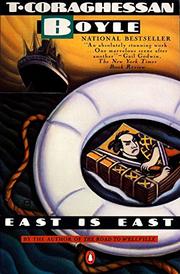 Expect the Unexpected from this consummate showman, who builds his fourth novel (World's End, 1987, etc.) around a manhunt for an illegal alien and its impact on an artists' colony: this is a bittersweet extravaganza, rooted in East/West misunderstanding, and told with fine comic flair. Hiro Tanaka is a half-breed (his father was an American hippie), and that's bad news in Japan, where Haywire was born and raised. As a defense against the unremitting insults, he wraps himself in samurai philosophy and joins the crew of a US-bound freighter. Forced to jump ship (more insults), he swims ashore to Tupelo Island off Georgia, home to the artists' colony of Thanatopsis. One of the resident artists is Ruth Dershowitz, a hopeless writer but dazzling conniver (think Becky Sharp) who owes her place there to her involvement with Saxby, amateur aquarist and son of the colony's founder, Septima Lights. When Ruth catches Haywire stealing the lunch-bucket outside her cottage, she decides to shelter him (good material, right?), though by now Haywire has had a run-in, with one of the local blacks, inadvertently caused a fire and a fatal heart attack, and is being pursued by two absurdly mismatched Immigration agents, a gentlemanly Yankee and a manic Vietnam vet. Boyle has a multiple-narrator, three-ring-circus going here, as he moves between the Yankee agent, Saxby, Haywire, and Ruth (who is also engaged in a war-to-the-death with her nemesis, fellow-writer Jane Shine). Haywire is captured, escapes, is recaptured in the Okefenokee Swamp (where Ruth is used as bait), but still manages to die a samurai's death; meanwhile, Ruth converts his notoriety into her journalistic debut. Thus another American tragedy ends with a lucrative book deal. A grim parable? Hardly. Even though almost every contact Haywire has with Americans ends in disaster, an anarchic comic spirit keeps breaking through, while the novel's other half, the Thanatopsis scenes, fairly sizzles with cheerful malice.