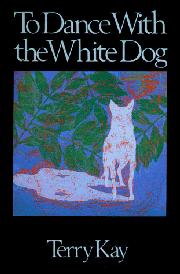 TO DANCE WITH THE WHITE DOG

A powerful--if occasionally programmatic--mythic narrative about a man who loses his wife and lives through years of grieving with the help of a mysterious white dog. Sam Peek, ""one of the smartest men in the South when it comes to trees,"" is a journal-keeper, and the novel sometimes uses his entries to good effect to accentuate his emotional tone: ""Today my wife died. We were married 57 years."" His loving family cares for him, but they also discuss him in his presence, as though he weren't aware of it, in ""sad, worried voices"" (""Old man that he is, what's to become of him?""). Slowly, however, he's left to himself, and for company a white dog appears. Sam's children, of course, assume he's hallucinating, but as the story deepens they begin to glimpse the dog. The details of his everydayness--a round of chores and errands, of Bible-reading and radio programs--are contrasted with the mythic sense of the white dog. As the daughters ""talk constantly to one another over the phone about their father,"" Sam goes into and out of the hospital, watches the dog race him to his wife's grave at the cemetery, and finally goes off in his track with the dog for a ""reunion"" to the place where he proposed to his wife. He gets lost, naturally, and the family is beside themselves, fearing violence, searching everywhere; but Sam, asleep in his track, is found by a preacher who believes in ""divine accidents, or interventions."" Sam returns home, develops an interest in genealogy, and slowly dies of cancer. When his daughters move in to help him through his last days, the dog disappears, and shows up again only (via pawprints Sam's son sees) on the grave Sam finally shares with his wife. An austere yet vivid effort--Kay's fourth (Dark Thirty, 1984; After Eli, 1981, etc.)--that manages to texture a plethora of everyday details with a kind of subtle, supernatural resonance.