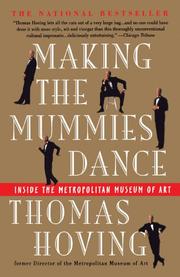 MAKING THE MUMMIES DANCE: Inside the Metropolitan Museum of Art

A backbiting, freewheeling account of irrevocably shaking up the country's leading museum--told at breakneck speed by former Metropolitan Museum of Art Director Hoving (Discovery, 1989, etc.). ""From the moment I leaped out of my city limousine and dashed up the steps of the Met, I was picking the place apart."" The brash, publicity-seeking scholar and former N.Y.C. parks commissioner began his ten-year reign in 1967; during it, the museum repeatedly made front-page news. It bought VelÃ¡zquez's Juan de Pareja secretly at auction for over $5 million, and purchased a vase by Euphronios allegedly robbed from an Italian tomb. It ""deaccessioned"" paintings, including a van Gogh, and the catalogue for the ""Harlem on my Mind"" show was so inflammatory that it was withdrawn. Hoving's vision for the museum as ""a living forum for communication and teaching and education and celebration"" meant doubling its size, mounting blockbuster shows, acquiring ""the big, rare, fantastic pieces, the expensive ones, the ones that would cause a splash."" Crowded with rich trustees and erratic art-world figures, the museum's backstage, as depicted here, is as ugly as any. ""To survive,"" Hoving argues, ""a director had to be"" not just ""scholar [and] aesthete"" but ""part gunslinger, ward heeler, legal fixer, toady."" In fact, from the evidence here, those roles seemed Hoving's choice. And though he takes the blame for many ""disasters,"" he attributes them to his backing down on a master plan that was, despite criticisms of grandiosity, finally ""too little and too cowardly."" Leading the public to the Met's keyhole, Hoving reveals that his directorship had much to do with intrigue, money, and power, still, 15 years later, he fails to thoughtfully analyze what his drive for the grand scale ultimately meant.