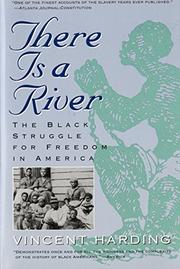 THERE IS A RIVER: The Black Struggle for Freedom in America

The first of three volumes that will eventually constitute ""a narrative, analytical, and celebrative history of the freedom struggle of black people in this country,"" and a considerable achievement in its own right--learned, passionate, defiant, eloquent, and wise. Harding, an activist and teacher (presently at Pendle Hill), argues that from the earliest days of slavery through the grim betrayals of Reconstruction, there existed in America a deep and powerful current of radical black resistance to both Southern servitude and Northern racism. Others have researched and remarked upon much of what he writes about here--the origins of the slave system, the rebels and the runaways who fought it, the gathering of forces that brought it down--but not until now have these been so forcibly presented as the elements of a genuine tradition of radical thought and action, gaining momentum and sophistication, generation after generation, until it challenged the very foundations of American society and government. The writing of black history will not be quite the same. Old and familiar subjects (the millennial prognostications of David Walker, Nat Turner's revolt, the back-to-Africa strategy, day-to-day slave resistance, the political struggles within the abolition movement) will have to be re-evaluated in light of Harding's interpretation. What is more, a vast range of less familiar subjects (the frequent collaborations between Indians blacks, the role of ""outlayers,"" the formation of militant black resistance organizations, the rising tide of black radicalism on the eve of the Civil War) will now demand the attention they have not yet received. No doubt a number of his judgments will not go down easily--his highly favorable treatment of Martin Delany at the expense of Frederick Douglass is a case in point, his emphasis on the religious roots of black radicalism is another--but Harding is never careless or gratuitous: when he provokes, he does so with a skill and intelligence that command respect if not always assent. A book to be reckoned with.