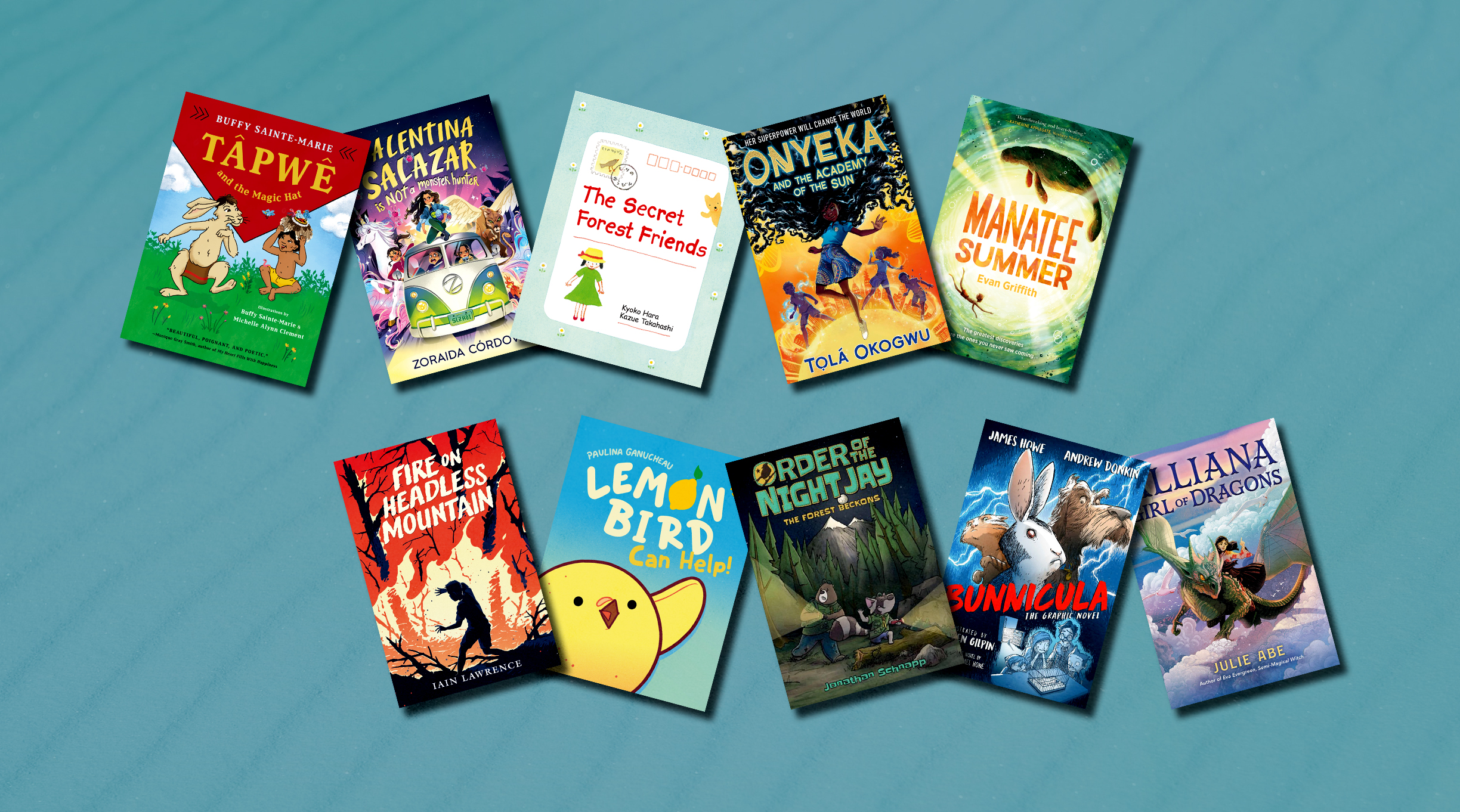 Whether readers are seeking fairy-tale retellings, fantasy, or realism with a hint of magic, they’ll find something to love among the bevy of middle-grade novels publishing this summer.

The Secret Forest Friends by Kyoko Hara, illustrated by Kazue Takahashi, translated by Alexandrea Mallia (Museyon, June 1): In this sequel to The Mailbox in the Forest (2021), a Japanese girl named Mayu visits her grandparents one summer and reconnects with Konta, a fox whose existence she conceals—until a minor mishap occurs. This whimsical, low-stakes tale brims with the quiet joys of friendship.

Onyeka and the Academy of the Sun by Tolá Okogwu (McElderry, June 14): British Nigerian Onyeka learns to embrace her vibrant hair after discovering it’s part of her powers, or Ike. Attending a boarding school with other magical Solari is just the beginning of the adventures she has in this exciting futuristic story.

Valentina Salazar Is Not a Monster Hunter by Zoraida Córdova (Scholastic, June 28): The Salazars, a family of monster protectors, left Ecuador and settled quietly in upstate New York following the death of 11-year-old Valentina’s dad. But a rare orü puma egg changes everything in this novel that is equal parts heartwarming and page-turning.

Manatee Summer by Evan Griffith (Quill Tree Books/HarperCollins, June 28): Peter and Tommy, two White Florida boys, hope to record the 100th entry in their animal Discovery Journal during the summer before middle school. A manatee becomes a catalyst for change and growth in this textured novel about emotional growth and environmental activism.

Tâpwê and the Magic Hat by Buffy Sainte-Marie, illustrated by Buffy Sainte-Marie and Michelle Alynn Clement (Greystone Kids, June 7): When Tâpwê, an Indigenous boy, visits his cousins, his grandmother gives him a hat inhabited by talking animals—but can they guide him through encounters with a Trickster rabbit? With this tale that publishes simultaneously in Cree, Sainte-Marie offers a delightful blend of the magical and the everyday, featuring a relatable young protagonist.

Order of the Night Jay: The Forest Beckons by Jonathan Schnapp (Top Shelf Productions, July 26): A timid bear feels woefully out of place at summer camp, but with a new friendship and a mystery to be solved, things look up. Debut graphic novelist Schnapp’s cartoon illustrations ooze hilarity and pathos, and the cliffhanger ending will have readers begging for the follow-up.

Alliana, Girl of Dragons by Julie Abe (Little, Brown, Aug. 2): In this Japanese-influenced “Cinderella” retelling, an orphan with dreams of joining the Royal Court flees the tyranny of her stepmother with the help of a dragon and a witch. This exhilarating fantasy takes place in the world of the Eva Evergreen series.

Lemon Bird: Can Help! by Paulina Ganucheau (Random House Graphic, Aug. 23): Stranded, Lemon Bird and her pal Pupkin must find their way home. Ganucheau’s graphic novel has a manga-flavored vibe, with endearingly rounded characters (most of whom are blends of flora and fauna) whom readers will cheer on.

Fire on Headless Mountain by Iain Lawrence (Holiday House, Aug. 23): Virgil, 11, and his older brother and sister set off to scatter their mother’s ashes in a remote lake, but their van breaks down, a forest fire is raging, and the siblings become separated. This gripping story includes fascinating scientific content.

Bunnicula: The Graphic Novel adapted by James Howe and Andrew Donkin, illustrated by Stephen Gilpin (Atheneum, Aug. 30): House cat Chester is convinced that the new family pet is a vampire—to the consternation of Harold, the book's canine narrator. Dynamic artwork ratchets up the drama and the humor in this adaptation of Deborah and James Howe’s prose novel.