Talking to the editor of UNDERGROUND IN BERLIN 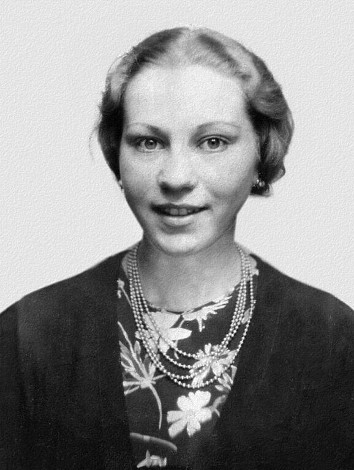 Marie Jalowicz Simon, circa 1944, while she was hiding right under the Nazis' noses.

There are too many thrillers to count whose plots feature innocent characters who end up in the cross hairs of either the authorities, who consider them guilty, or nefarious criminals. Screenwriters love the premise too (think Hitchcock’s North by Northwest).

But what if the story were entirely real and happened to a particularly insightful, determined, and clever young woman? Underground in Berlin is Marie Jalowicz Simon’s account of her life as a Jewish woman hiding right under the noses of Nazi officials (and pro-Nazi citizens) in Berlin during WWII. Somewhat strangely, this nonfiction book about a victim of the Gestapo has the exhilarating sweep of a good spy novel. About halfway through the book, Marie asks this of a man in a position to help her evade the authorities: “Can you imagine someone who has never done any harm to another human being, who has never broken the law, let alone committed a bad crime, being in great danger?” He helps her.

Dictated to her son Hermann Simon during the last months of her life (she died in 1998 after a long career as a classics professor), Marie’s recollections of he

r war experience filled 77 tapes. The transcript ran to 900 pages (Underground in Berlin is a more manageable 384 pages). There are many memoirs written by Holocaust survivors; not all of them are published by a major American house. Tracy Behar, vice-president and executive editor at Little, Brown, happened to be visiting Berlin last year with her son. They had dinner with NYU professor Thomas Ertman, who directs a study-abroad program there, and he raved about the bestselling German edition of Underground in Berlin. Coincidentally, one week after she returned home, InkWell literary agent George Lucas sent her the first 20,000 words of Underground in Berlin, and she snatched it up. “It’s the first time I’ve ever read such a detailed account of daily life in the middle of Nazi Germany,” Behar says. Marie “took off her yellow star and disappeared into the city and hid out, taken in by communists and even Nazis and various kind-hearted people. It’s very, very rich and detailed; it’s almost like oral history.” Marie never told the full story of her life during the war until her son asked. In a foreword to the book, Hermann wonders why Marie waited so long. But he quotes her as saying, “If I tell you something, then it has to be the truth, and there’s a lot that one can’t talk about until half a century later.”