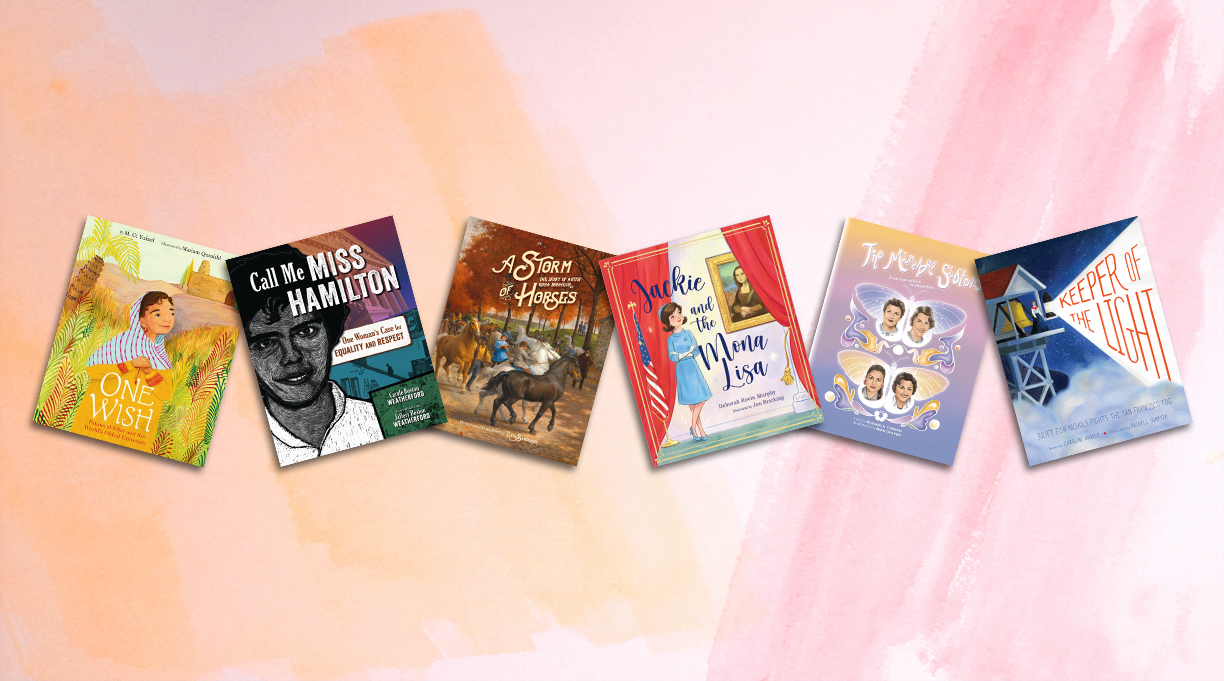 March is Women’s History Month, and while the assertion that women can claim a history of their own is not as radical to today’s readers as it may have been to folks of yesteryear, there are still numerous stories of women’s pervasive influence, weighty achievements, and instructive triumphs that need much more light cast on them. I would love to share an endless raft of picture books that serve this important work, but one only has so much space in an editor’s column, alas. So I will instead share a clutch of recent and soon-to-be-released titles. Here’s what Kirkus’ reviewers had to say about them.

Call Me Miss Hamilton: One Woman’s Case for Equality and Respect by Carole Boston Weatherford, illustrated by Jeffery Boston Weatherford (Millbrook/Lerner, Feb. 1): “Young readers are introduced to the inspiring life of lesser-known civil rights leader Mary Hamilton.…Weatherford’s text is straightforward, unfolding the story in pithy, reportorial prose. With a combination of black-and-white photos (including a montage of portraits of Hamilton’s relatives) and scratchboard art, the book presents iconic, unvarnished images of the civil rights era and captures Hamilton’s bold determination.…Essential reading for teaching children about the importance of demanding equality and respect.”

One Wish: Fatima al-Fihri and the World's Oldest University by M.O. Yuksel, illustrated by Mariam Quraishi (Harper/HarperCollins, March 1): “Born in present-day Tunisia in the early ninth century, Fatima al-Fihri craved knowledge and had one wish—to build a school where all would be welcome.…With the inheritance she gained after her father’s death, she began the taxing process of building and establishing the University of al-Qarawiyyin, which today remains the world’s oldest continually operating university. Several textual details reveal the important role Fatima’s Muslim faith played in her life, and Yuksel frequently employs figurative language to emphasize her strong convictions about education and equality.”

The Mirabal Sisters: From Caterpillars to Butterflies by Raynelda A. Calderón, illustrated by Maria Ocampo (Cayena Press, March 1): “Calderón’s biographical picture book tells the story of four revolutionary sisters of the Dominican Republic.…Although grim material for a children’s book, Calderón’s tale is presented in a sensitive manner, and Ocampo’s full-color, painted illustrations focus on the vivid colors and beauty of the island nation rather than on violence.…This work offers insight into an underrepresented slice of history. An inspiring and unusual story of heroic women.”

Jackie and the Mona Lisa by Debbie Rovin Murphy, illustrated by Jennifer Bricking (Sleeping Bear Press, March 15): “The inspiring story of how first lady Jackie Kennedy organized the first ever exhibition of the world-famous Mona Lisa on American soil.…Murphy succeeds in showing how the new, youthful first lady, schooled in the arts and admired by the American public for her fashion styles and French affiliation, exerted a huge influence on U.S. culture.…Jackie Kennedy’s trailblazing work remains relevant for today’s young readers.”

A Storm of Horses: The Story of Artist Rosa Bonheur by Ruth Sanderson (Crocodile/Interlink, March 15): “A profile of groundbreaking 19th-century French animalier Rosa Bonheur. Sanderson, herself a realistic painter whose initial artistic inspiration was horses, crafts an engaging biography whose dramatic oil compositions and engrossing narrative will pull in other equine aficionados.…An inspiring glimpse into the talent and drive of a woman who marched to the beat of a different drummer.”

Keeper of the Light: Juliet Fish Nichols Fights the San Francisco Fog by Caroline Arnold, illustrated by Rachell Sumpter (Cameron + Company, April 12): “A fascinating introduction to a once-celebrated, now lesser-known lightkeeper.…Her journal entries, based on historical documents, appear in light, thin handwriting and illuminate her mostly solitary life, wholly dedicated to her important work and punctuated by times of terror and danger as well as occasional trips to the city across the bay for supplies. The story conveys Juliet’s deep appreciation for the beauty of the sea and the island’s landscape.”