An Interview with Kyle Jones 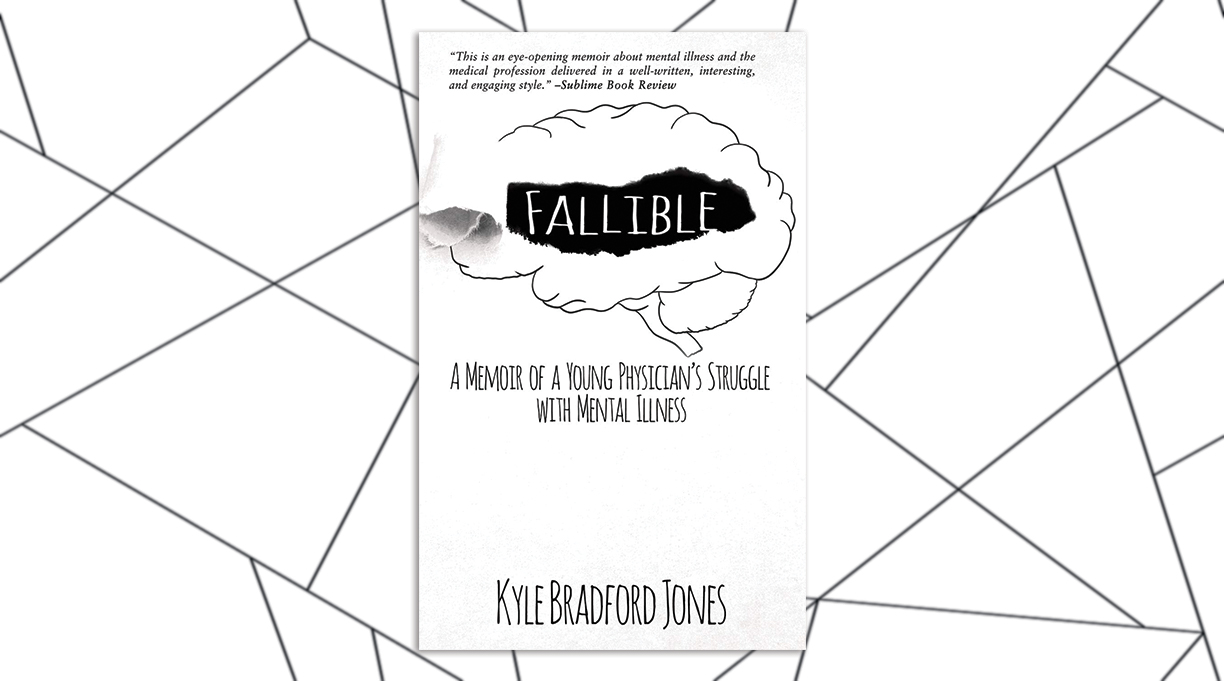 Kyle Jones has led a life that most would envy.

He had what he calls a “great childhood,” growing up with two older siblings in a loving home. He was and remains active in the Church of Jesus Christ of Latter-day Saints, and his mission work took him to Ukraine for two years as a young man. He now has a family of his own and is a highly regarded associate professor at the University of Utah Department of Family Preventive Medicine.

But along the way, there have been demons, and Jones explores his battle with mental illness in Fallible, a new memoir that Kirkus Reviews calls an “immersive, eye-opening journey [that] reveals the effects of mental illness on a physician.” It’s a gripping but enlightening tale of a man trying to come to terms with his general anxiety and major depressive disorders. It wasn’t easy for a physician to do.

“Doctors, in general, are good at hiding things like this,” Jones says. “Even if you’re really struggling and things are going poorly, you’re taught that it doesn’t matter what you’re feeling. You’ve got to keep going and take care of the patient.”

For years, Jones was good at hiding his illness. In fact, for the longest time he didn’t even know he had an illness—not when he suffered panic attacks while playing in a baseball game or serving as a missionary far from home or while pushing himself as a student.

It wasn’t until he was a student at Utah State University that he realized what he was dealing with was more than normal childhood anxieties. “There was one moment as an undergrad student when I was working at a group home with individuals with mental illness, and in the middle of the night—I was sleep-deprived—I had a panic attack,” Jones recalls. “I thought it was a heart problem.…My doctor said, ‘I think that’s anxiety.’ All of the things that had been building for years kind of clicked. That was kind of the moment I realized something was going on.”

Jones describes the incident in his book vividly:

The chaos of emotion had been a steady trickle inside me for years, but one night it became an engulfing deluge. One moment I was fine; the next I thought I was dying. My heart began racing. I had a heavy pressure in my chest. I was nauseated. It was hard to take a deep breath and it felt like drowning. I was lightheaded. My vision became blurry, murkiness starting at the periphery and converging to the center of my gaze, as though I would pass out. I was convinced something terrible was happening, but I didn’t know what. I seemed like a gnat trying to fight an elephant about to step on me.

Jones first went public with his mental illness in a blog post for the American Academy of Family Physicians in 2014. “I had been thinking about it for a little while; however, it also came from the realization that my experiences were not unique,” Jones says of mental illness among medical professionals. “Having seen fellow residents and…faculty and colleagues, and seeing the effects of burnout and other things on them, showed me that it [wasn’t] just me. This is a bigger problem, and we should be talking about it a lot more.”

Fallible is filled with details from Jones’ life, and he manages to impart them in such a way that readers who are not medically inclined can relate to them. Consider this passage, from the book’s first chapter, in which he introduces readers to the “gargoyle” that, to him, personifies his panic:

I know anxiety close-up and personal. Sometimes I failed to get out of bed, avoided going to parties, skipped work, neglected my family, and experienced severe physical symptoms originating from my anxiety. It appears as a gargoyle forever watching me. Though I know it should be fake and harmless, its appearance is disconcerting enough that I don’t know what it is or what it may do. I can’t even be sure that it’s really there. But it feels like it is.

The gargoyle reference pops up frequently in the book. “Throughout my struggles, the anxiety and depression felt like something real,” he says. “I felt like it was over my shoulders the whole time. That seemed like kind of the perfect image to represent how I was feeling.”

Often seen perched at the top of churches or cathedrals, the gargoyle also helps Jones tackle the topic of religion and how much it may or may have not contributed to his illness. “The traditional gargoyle is there to keep out evil spirits, but sometimes you can turn that around,” Jones says. “You could look at it that they’re almost keeping those negative things inside you and you’re not letting them out.”

Fallible aptly details the strain that mental illness can put on others—friends, co-workers, and especially family. At the same time, Jones explains that some anxiety and depression are perfectly normal for most everyone. “I wanted to help people understand as much as possible where the line is between normal emotions and mental illness,” he says. “We all experience anxiety from time to time and depression from time to time, but when does it cross the line? Especially with children, we have a hard time finding where that line is.”

To this day, Jones doesn’t know the root cause of his mental illness, though he suspects it is genetic. “That’s something that’s relatable to a lot of people with mental illness,” he says. “We feel guilty for having severe anxiety and depression because there’s nothing that stands out to have caused it. I had a very positive childhood, by and large. Why in the world should I be struggling?”

The book, which is at times dark but also can be quite humorous, ends on a high note with Jones and his wife raising their children in Utah. “I’m actually doing quite well,” Jones says. “Certainly, I have periods where it bubbles up and disrupts things, but I’m in as good a place now as I have been in 20-plus years. I feel like I have a good mix of medications and a good therapist.”

Alec Harvey, a former president of the Society for Features Journalism, is a freelance writer based in Alabama.